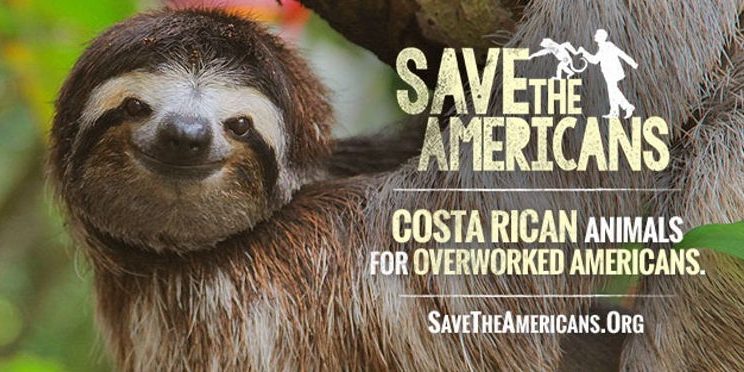 Throughout May and June 858 movie theaters located in some of the cities with a large concentration of ‘best prospects’ in the US and Canada will screen the promotional video from the international publicity campaign titled: Save The Americans, Save The Canadians, respectively.

According to Mauricio Ventura, Minister of Tourism, the different tactics that complement the campaign seek to capture the attention of the people and make them perceive Costa Rica as a vacation oasis; the ideal escape to take a moment from the daily hustle and bustle, with the objective of enjoying an authentic travel experience, in addition to encouraging destination referrals.

He also indicated that this tactic seeks to reach an important number of people in a different manner, generating multiple commentary for its creativity.

“We are looking to cover the largest number of potential markets for Costa Rica that have previously been successful with traditional publicity, which is why the development of these different activities in previously successful markets serve as a guarantee connection from these markets”, confirmed Ventura.

The campaign video will air from April 30th to May 13th and from June 12th to June 25th, along with various blockbuster film releases in the US. It is estimated that the campaign will reach 2.7 million impressions (the number of times that the audiences will be exposed to the ads), guaranteeing a large exposition of our target audience.

The campaign video was produced in Costa Rica and has the participation of national artists, among them is Master Key, the renowned Costa Rican group who does voiceover for some of the animals in the video dedicating song to the Americans and Canadians that work too much.

KLM and Air France offering great deals for Costa Rica flights!
July 27, 2017
Our website is quite big, use our Search Tool:
Check our blog!
Write a Review!
Go to Top