What Wikipedia can’t tell you about Costa Rica insects

Costa Rica insects are many… so many that species are discovered every single day. However, the biggest and most fierce are not as dangerous as we may think and the tiny and harmless looking are the one that can create big trouble. 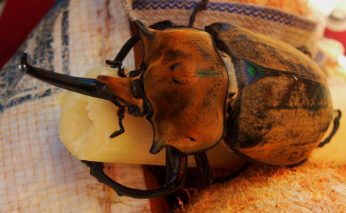 When I was a kid, back in the seventies, my Nanny Elena used to tell me these horrible stories about the “Chiquizá” (Chee-keee-zaa).

(I learned later in life that their real name is Tarantula Hawk) The Chiquizá was a huge black wasp with bright orange wings and my nanny Elena, would say that its sting would not only hurt terribly but also give .you a fever, and in my fertile imagination, you would die in the middle of horrible pain. 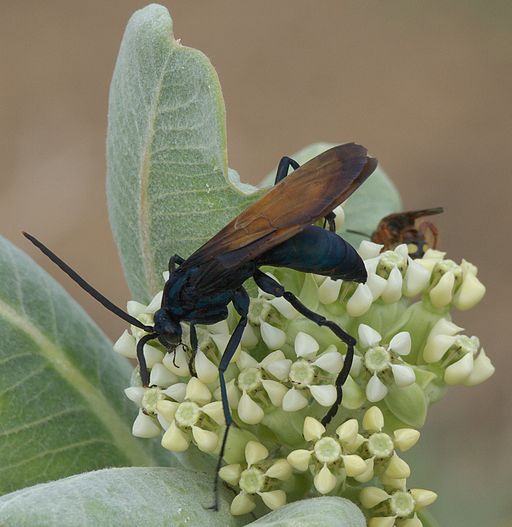 Throughout my wandering, traveling and tour guiding years I saw several creatures that provoked chills to some people, and actually, the adventurer in me always found them kind of interesting… Tarantulas, Fer de Lance, Eye Lash vipers, even Bullet ants and other beauties would make a stop and explain, a stop and picture, stop and observe, sometimes for long periods of time. I like snakes; I like tarantulas… I don’t mind Bullet Ants… But if I see a Chiquizá… I will run! As fast as possible, terrified!

It even happened to me once, with a group of intrepid young Dutch photographers that we had seen a couple of Fer de Lance vipers (One of the most aggressive and poisonous vipers in the World) and I told them to take the picture above my shoulder as I knew, pretty much, the length of their jump if they felt disturbed.

I was young, I was skinny, and probably they saw me as sort of a Latin American Lara Croft… Until later in the tour we saw a “Chiquizá” flying towards the group while walking on a rainforest trail. I screamed

Until later in the trip, we saw a “Chiquizá” flying towards the group while walking on a rainforest trail. I screamed irrationally and started to run up the trail like a mad woman.

They did, the same… yelled and ran behind me forming a crazy group of insane people.

Later on in life, whenever I remember this afternoon I can’t stop laughing, as all I could see were these huge Dutch people screaming and running after me as if their life was on a stake.

When we arrived at the nearby restaurant, their urgent question was “What was it that terrified you so?” I felt so embarrassed when answering… “Hmmm… a tarantula wasp!”. “A wasp?” “It is big and terrible… and… they are deadly!”… “Deadly?!”….. “Well! Not deadly deadly… but their sting causes a lot of pain!”

My embarrassment receded when I heard about the actual pain index for stings from bugs by the entomologist Justin O. Schmidt that created this index that seeks to rank the painfulness of dozens of Hymenoptera stings across a four-point spectrum. 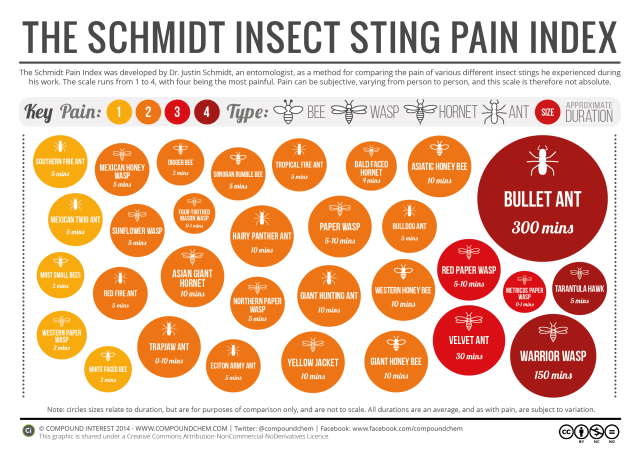 So! Is this paradise after all?

Well yes! You just have to know a couple of tricks around the Costa Rica insects!

First of all, my Nanny Elena was not right exactly, the Tarantula Hawks are not hunting anyone down! They are quite easy and mellow, even if their sting hurts a lot (Or so I’ve read… I’ve never ever! Known anyone stung by one… And of course I never was!) they are not aggressive and between fleeing or fighting they will always fleed. 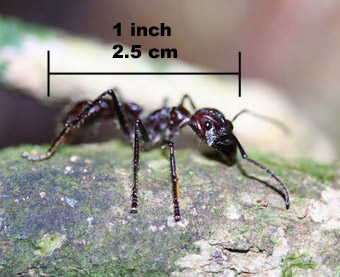 The most painful is not hunting anyone either! The bullet ants live in trees in the rainforest. And usually, you see them wondering on the barks of trees either climbing up or coming down. And that is what you really have to know!

The bullet ants live in trees in the rainforest. And usually, you see them wondering on the barks of trees either climbing up or coming down. And that is what you really have to know!

“Watch before putting your hand anywhere!”.

Colonies consist of several hundred individuals and are usually situated at the bases of trees. And they go up the trees to forage for nectar and small bugs.

They are extremely common, and they have been places where they’ve found four ant nests in one hectare… so! Just be careful and watch where are you putting your hand. Especially when talking about large trees with buttresses.

And if you come with children into the forest, try to never let their hand loose. If you don’t think you could do that, ask us about nannies in the hotels or the tutoring system that we can provide for families (Together with a tour guide another person will come with the family group simply to baby sit and entertain the children).

To wrap it up, let me say that no… They are not after humans!

Not the vipers, not the bullet ants, not even my dreadful friend the tarantula hawk! Humans are big animals, and we are predators!

If it worked for me throughout my almost 25 years in the rainforests*, why wouldn’t it work for you?

The most dangerous animal in the jungle

Among all the Costa Rica insects the most dangerous one is actually the mosquito. Mosquitos carry parasites with diseases as Zika Virus, malaria or dengue.

Now, it is quite easy to prevent with a good repellent and proper clothing.

*I was a naturalist tour guide for almost twenty-five years throughout the forests of Costa Rica, Nicaragua, and Panama, not once was I stung by a bullet ant or a tarantula hawk or bit by a snake. Neither got malaria, dengue or Zika virus.  Worst that ever happened to me, several times yes, was to put my foot over fire ants and suffer them… But that’s ok!

If you want to reproduce this article (Complete or in part)  please use the following reference and link:
Olga Sáenz-Carbonell for Camino Travel. (2017, 5 April 2017). What Wikipedia can’t tell you about Costa Rica Insects. [Weblog]. Retrieved 5 April 2017, from https://www.caminotravel.com/what-wikipedia-cant-tell-you-about-costa-rica-insects/