A cloud forest is a rain forest without the pouring rains and in a much cooler temperature. It has a 100% humidity all year round, and a permanent cloud cover in it, and definitely a constant magical spell sensation…

Just picture where Costa Rica is… surrounded by the two seas… The Pacific and the Caribbean. A narrow strip of land with heights up to 12,000 feet. The wet tropical trade winds puffing east to west from the Caribbean Sea. These humid winds go up the mountains, and as the air cools it rises in altitude, and the moisture is squeezed out to form water dews which make up the almost ever-present fog (And clouds). One of the important features of a cloud forest (contrasting to a rain forest) is that in a cloud forest most of the moisture is gained from the clouds (horizontal mists), and a slighter amount is received as vertical rain. Plants have evolved to depend upon this constant mist and hundreds of animals have evolved to depend on these plants.

Because cloud forests are found in the mountains, they are much chiller than the hot tropical rainforests most people know.

As you come into the cloud forest the most noticeable plant everywhere are epiphytes and specifically the bromeliads. These aerial plants that depend on the nutrients carried in the clouds and breeze. They do create tanks of water up on the branches where many species live all their lives. Or use them to protect their eggs, and their juveniles. Mountain winds and the added weight of water in the epiphytes often cause branches to fall to the ground. Falling branches also create light gaps, allowing the growth of light tolerant plants and producing a constant mosaic of succession.

Without the pouring rains that happen in the rain forests, the leaves that fall to the topsoil will not crumble fast enough to give nutrients back to the trees. In the cloud forest, rain permeates the topsoil more easily; hence as a general rule trees will grow smaller than in a rain forest. This reduces the height of the cloud forest canopy and adds to the forest’s knotty appearance. Animals are abundant but the cloud forest has thicker understory foliage so that we, as visitors, are less likely to see them. Indeed birds are more abundant as well as evident in secondary underbrush and forest.

Another thing that you will notice as you enter a cloud forest are the moss and the gigantic ferns… and fern trees. They are the water collectors by excellence. In the cloud forest clouds, fog, have to be turned into liquid water for the plants to survive and that is when moss makes a star apparition damping itself and keeping the liquid safe to go in the soil or directly to the trunks and stems of plants and trees.

On the other hand, the thick roots of ferns are great to keep the soil and the water in it. And that is why we see so many of them. 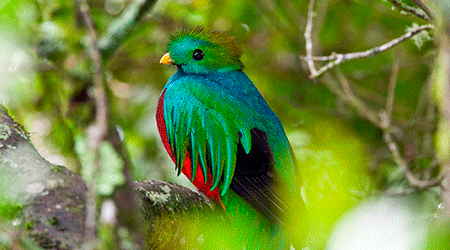 Birds also play a singular part in the system of cloud forests. They are both harvesters and planters and keep insect populations at bay. The birds compose the as well the sounds of the cloud forest and their songs, chirpings and calls echo through the dense trees and plants creating a natural magical environment.

Now, let’s not think about what birds do for cloud forests but imagine what cloud forests do for birds as they sustain a remarkable diversity of endemic and near endemic species. Providing a safe haven for wintering birds.

They are also important foraging areas for migrating birds that winter further south and pass through on their way to their nesting grounds in the north.

Where can you find cloud forests in Costa Rica?

Some of them are very well known and popular, like Monteverde of course, where there are all sorts of choices to see it and enjoy it.

But then there are some, lesser known like the cloud forests in the Southern Mountains, in the area of Savegre and San Gerardo de Rivas, as well as up in La Amistad almost reaching the Panama border.

However, if you really want to see the cloud forests ask our travel consultants… It truly depends on what you want to see and experience… As you tell them, they will recommend what’s the best Tropical Cloud Forest for you.