Following days of a “normal” eruptive activity with steam and gasses, the Turrialba volcano stroke back this morning, spewing ash 3000 feet above the crater. 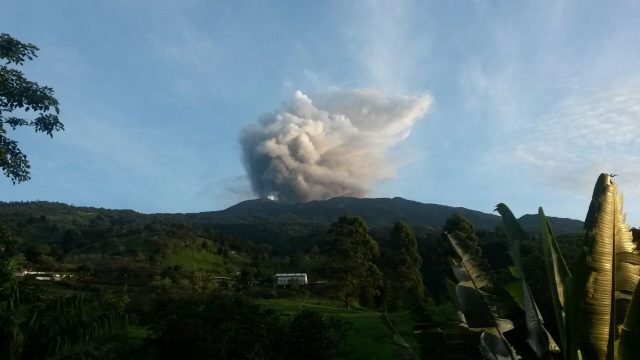 Foto by Daniel Rojas, from Facebook/Ovsicori

The 5:10 am eruption was the third since Wednesday night, according to the Observatorio Vulcanológico y Sismológico de Costa Rica (Ovsicori) – Volcanological and Seismological Observatory of Costa

Watch the video of this morning’s eruption.

The ash and gas expelled by dispersed by the Turrialba went North and Northwest (in the direction of San Jose and surrounding areas) according to the OVSICORI cameras and the weather stations by the Instituto Meteorológico Nacional (IMN) – National Meteorological Institute – located atop the volcano.

The Turrialba Volcano has been very active in the recent months causing major trouble in agriculture and the daily lives of the people that lives close to the colossus. And creating in the Costa Rica social networks an incredible wave of false predictions and some paranoia.

Experts are not ruling out the possibility the volcano is getting ready for a major eruption, however they do feel that the spewing is lava is unlikely.

And if it does, the lava flow would be ver slow and on the north side of the volcano, and travel a distance of not more than one kilometre through an area inhabited.