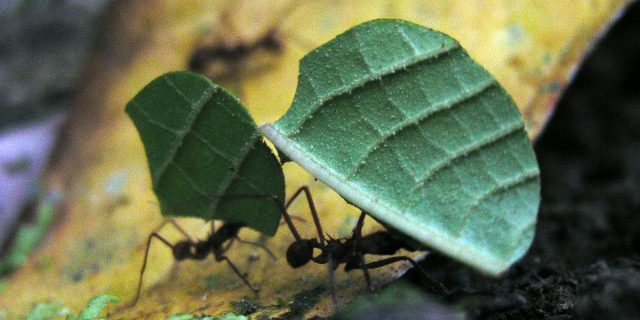 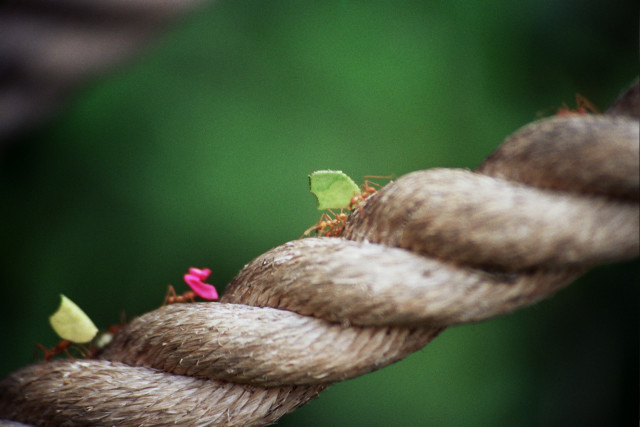 When looking for wildlife in Costa Rica it’s easy to become fixated on the weird mammals and vibrant birds, but one of the country’s most complex creatures lies underfoot.

Living in massive colonies of up to 5 million members, leaf-cutter ants (Atta cephalotes*) have walked the earth for millions of years. The resilient ants can even be found streaming along through the street gutters of San José in their characteristic sea of green leaves. Moving along their forged path, each ant will carry a piece of leaf up to three times its own weight.

Common sense would indicate that the ants feed on the tiny leaf pieces, but leaf-cutters actually use the clippings to cultivate their own fungal garden. To sustain this production, the ants have evolved intricate societies that are now among the oldest and most elaborate on earth.

Leaf-cutter ants’ millennia-long existence can be attributed to their relationships with other organisms. Using leaves cut from trees, the ants cultivate a fungus from which they feed. Studies show that leaf-cutting ants have been cultivating the same strain of fungus for at least 23 million years. Neither the ants nor the fungus can survive without the other, and this link is perhaps the best recognized example of mutual symbiosis, the dependance of two species on each another.

The two species are so inter-connected that each new colony begins with both an ant and a fungal growth. A new queen will take a small bit of fungus from the colony where she is born before flying off. The queen will then mate before taking the fungus underground to form the new colony.

The first days for a newly anointed colony queen are busy. Along with nursing her young, the queen has to begin growing a new fungal garden by feeding it with her feces. Soon, the queen’s first set of young are large enough to leave the nest to cut leaves to continue to feed the fungus. As the fungus expands so does the colony.

But the ants’ monoculture fungal garden is extremely susceptible to another type of parasitic fungus that the ants cannot ingest. Left uncontrolled, the fungus will form a white growth over the ants’ garden, rendering it inedible and leaving the colony to starve. To combat this threat, the ants — already the world’s first farmers — became the world’s first pharmacists.

Female leaf-cutters carry a small patch on their cuticle that grows the bacteria Streptomyces. The ants spread this bacteria over leaves and fungi in the garden to kill other types of fungi. Not only does this particular bacteria ward off parasitic fungi for the leaf-cutters, but it also is found in more than half of the antibiotics in modern medicine today.

To manage the enormous tasks required for a farming ant colony, leaf-cutters have divided roles, or castes. Leaf-cutters, like many insects, are polymorphic, meaning that within each species there are a number of different body types each suited to a specific task, known as castes.

Queens, the colonies’ founders, have wings to fly off to start another colony and are the only fertile female ants in any given colony. Their sole job is reproduction, which is aided by drones, or small, winged males that fly from colony to colony to help reproduce.

The rest of the ants in the colony are infertile females tasked with protecting the nest and caring for the fungal garden. Soldier ants are the largest in the colony and, as the name implies, are responsible for guarding the other ants from predators. Next down the line are the workers, which forage and cut leaves and carry them back to the colony. There, they pass the leaves on to the smallest ants, the minima, which use their small size to work inside the colony tunnels. These ants are responsible for gardening, feeding other ants, caring for young ants and cleaning other ants and leaves.

Leaf-cutters also divide themselves by age and ability. The colonies put their older, weaker ants to work in the colony’s garbage dump. These ants are quickly infected with parasitic fungus and usually do not live long. Their bodies then die in the waste dump away from the healthy ants.

Biologists estimate that the ants manage to clear as much as 15 percent of the leaves in Neotropical forests for their fungal gardens indicating massive populations. Today the ants are among the most evolutionary successful creatures on the planet, having survived for tens of millions of years.

So the next time you walk through the forest, turn your head from the trees and skies and direct your gaze down for a glimpse at the oldest society on the planet.

*Note: There are seven species of leaf-cutting ants found in Costa Rica. Atta cephalotesare the most common.