The Science of Awe

You are here:
About our birdsBlogInteresting... 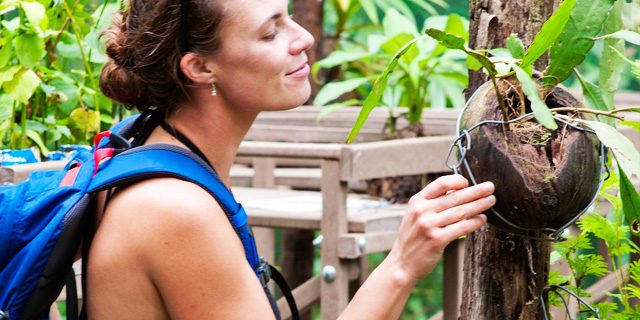 I spent the past weekend in Tortuguero, surrounded by the most magical tropical nature, toucans calls on the back, subtle raindrops swinging from small flowers, playing monkeys on my room roof… The sense of awe in nature is unbelievable, and traveling in Costa Rica, letting yourself get caught in it, gives more than a placid beautiful time to your life.

Regarding this amazing state that stays with you for days and even weeks, I found this article in the Costa Rican Times that told me so much about what it happens and what it does for you and all of us:

Nothing shows the limits of science and the scientific method more than recent studies of awe in human beings. Following the tiresome trend of hypothesizing on the evolution of every human behavior and capacity, Dacher Keltner, a professor of psychology at University of California, Berkeley, has been studying “awe deprivation.”

“We found that awe helps bind us to others, motivating us to act in collaborative ways that enable strong groups and cohesive communities.” That’s questionable.

Keltner added, “Awe is the ultimate ‘collective’ emotion, for it motivates people to do things that enhance the greater good.” That’s simply false. Feelings of awe no doubt benefit society, but the feeling itself is completely interior and private, the furthest thing from a ‘collective emotion.’

Supposedly scientific evidence for the beneficial effects of awe on society comes in the form of having participants gaze for minute at “a spectacular grove of Tasmanian blue gum eucalyptus trees on the UC Berkeley campus, some with heights exceeding 200 feet — a potent source of everyday awe for anyone who walks by.” A control group was asked to stare at a non-descript building façade.

Then, as part of the experiment, someone stumbled and dropped a handful of pens. Subjects who looked at the trees helped the seemingly hapless person pick up more pens.

It’s easy to make fun of this study, but the issues and questions it raises are serious. Cutting to the chase, the science of awe researchers put it this way: “Our research finds that even brief experiences of awe, such as being amid beautiful tall trees, lead people to feel less narcissistic.” Wow.

Continuing to miss the mark by a mile, the authors speak of “awe deprivation” in society, and say it relates to people being “more individualistic, more self-focused, more materialistic and less connected to others.”

I find it sad and disturbing that psychologists, whose job it is to accurately perceive the individual and society, don’t see the enormity of the breakdown in society and the self-centered reaction of most people to it.

The prescriptive value of awe with respect to altruism presupposes humans are basically self-centered, if not narcissistic, which needs to be offset by emotions such as awe “necessary for our collective life.” Keltner says, “in the great balancing act of our social lives, between the gratification of self-interest and a concern for others, fleeting experiences of awe redefine the self in terms of the collective, and orient our actions toward the needs of those around us.”

now it is defined in terms of the individual. They’re both the self, and the self is the problem.

The evolutionary purpose of a trait, behavior or capacity tells us nothing about its present relevance, usefulness and applicability. It’s deeply misleading to strongly and authoritatively imply science can know what awe is for and its benefit to the individual and society is.

The principle of evolutionary exaptation (traits that applied in one context when they evolved being applied in a very different way in a different context) is often overlooked in looking back to explain human traits and behavior.

Besides, like watching period-pieces at the movies, one is looking at the mindset of the present superimposed over the past, never at the past as it actually was. We need to face what is, and see that radical change across the board is the only way ahead.

It’s important to take a little time in nature, even if it’s just on one’s patio, rather than indoors. We moderns have little relationship with nature to begin with, and sitting quietly alone is a way of reestablishing some connection with the primal source of our existence.

The first stage of quietness is simple attunement to the sounds, sights, smells, and sensations around one. That puts one in the present.

The next stage is when the mental mechanism that chooses, judges, evaluates and stands apart—the observer—ceases its illusion of control, and one simply begins observing what is, outside and inside. The very act of observing in this way quiets the chattering, associating, imagining and planning mind. Indeed, it is the only action that can.

When awareness gathers, there is unwilled attention, which acts on the movement of thought, and the mind yields completely. The brain is no longer dominated by the mind, the intellect and experience, but a new dimension opens, which is tremendously regenerative.

Meditation is that state of spontaneous quietness of the mind brought about by observing without the observer and attending without the self. Just as meditation begins on this day sitting beside a placid stream, a Great Blue Heron appears a short distance away.

The magnificent, long-necked, long-legged bird is very shy, stepping in slow motion in the current. Even from 30 meters away you can feel its shyness. Sure enough, when I stand up and take a step, the huge heron lumbers into the air, flying upstream just above the water.

In a meditative state, the sight of that over very tall bird, possessing such dignity, alertness and majesty, brings a deep sense of awe, which remains with me for days.