The “Kermit” Frog of Costa Rica is Actually a Rediscovery

You are here:
About our diversityBlogInteresting...Rainforests 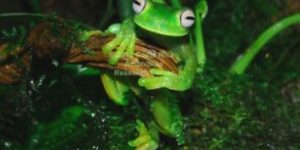 San Jose, Apr 27 (EFE).– The “Kermit” frog of Costa Rica, a “glass frog” discovered in Costa Rica 40 years after the last sighting of the animal anywhere in the world, is a source of constant admiration because of the translucent characteristics of its lima-green skin and insect-like sound.

The study, published in the February edition of the journal Zootaxa, was led by Kubicki, who chose the scientific name of “dianae” to honor his mother, Janet Diane Kubicki.

The new species, with a unique combination of physical and genetic features that differentiates it clearly from others in the same family, has captivated those who have seen it and say it resembles the Muppets’ “Kermit the Frog” because of its white, protruding eyes and intense green color.

H. dianae was found in the tropical rainforest and rainy piedmont woods on Costa Rica’s Caribbean watershed at between 400 meters and 800 meters (1,315 feet and 2,625 feet) above sea level.

The areas had been searched in the past, but no one had found the tiny frog, which emits a singsong sound quite different from that of others in the same family, scientists said.

Other distinct features of H. dianae include a truncated snout, granulated skin, visible heart, white iris with dots of light and dark reticulation, and the sound it makes is similar to a prolonged, metallic whistling, the scientists said.

The frogs belong to the Centrolenidae family of 150 species and are all found mostly in forests in the Americas.

Centrolenidae are anure amphibians native to the Americas and live from Mexico to Panama, as well as in the Andes from Venezuela to Bolivia, with some species found in the Amazon and Orinoco river basins, the Guyana ridge, southeastern Brazil and northern Argentina.

Costa Rica, with a population of 4.7 million, is home to almost 5 percent of the Earth’s biodiversity and is ranked among the 24 countries with the highest diversity of plant and animal life.