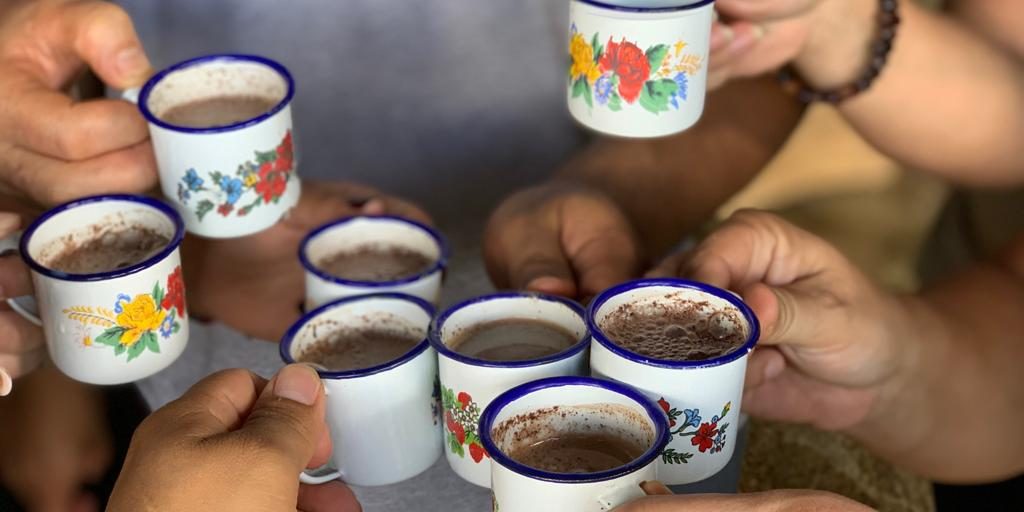 There are a lot of really exciting tours to be found around Costa Rica. Rafting, zip lining, boat tours, volcanoes, horseback riding, hiking… You name it, Costa Rica has it. Therefore, I have to admit that the Campesino Tour given by Ecoterra didn’t pique my interest quite as much as some of the others they offer, at least at first.

Oh was I in for a surprise!

First of all, let’s see what Campesino means. Campesino basically means country, as in the countryside. A campesino farmer is a farmer from the country. The Campesino tour takes a look at what life is like for a typical family in Costa Rica’s countryside.

Here’s how it went:

The family who owns the farm welcomed us as soon as we arrive, offering us freshly squeezed juice as we take our seats at the introduction area. They explained a little about their farm and about the cows, chickens, turkeys, ducks, parrots, and many other animals who live on the farm with the family. They talked about how they milk their cows twice a day, producing their own milk, cheese, and sour cream that they cook with and sell to their neighbors. Their fluffy white dog walked around the circle, greeting each of us in turn. A parade of honking geese waddled by, giving us a noisy, warm welcome.

I could say it is quaint, but that wouldn’t really tell you very much. Besides, it would almost sound a little condescending. This isn’t a backwoods family for us to photograph and ooh and aww over. They’re a working family who has created an ingenious project to conserve their land, teach outsiders what hard work can achieve, and give us a perspective on life we have probably never had before.

I am from the city- not a big city, but a city nonetheless. I did grow up with dogs, cats, chickens, and the occasional turkey, but I also grew up 5 minutes away from a hospital, supermarket, and everything you would expect from an urban setting. I have never truly lived in the country, especially not in Costa Rica. Still, it was a delight to pet their pregnant guinea pig and gather the warm chicken eggs from their nests. But for me, that part wasn’t all that new.

The new part came when a gentle, darling cow followed her farmer into the barn and he set down the stool and bucket. I have to admit that I was a little skeptical as I sat down on that stool with that bucket between my legs and a warm cow teat in my hand. I was a little skeptical as I squeezed it and nothing happened. The farm’s mother adjusted my technique and soon I was milking away as if I’d been born doing it. Okay, maybe not. But my skepticism vanished as they handed each of us a little traditional cup with chocolate, sugar cane, and liquor that we filled with fresh, warm milk. It was delicious.

From there, we walked through their farm, where we squeezed fresh juice from sugar cane (and of course mixed it into a fun drink called agua de sapo or frog water). We also learned how they make sugar cane liquor (where the adults got another sample- yum!). We visited their family garden, smelled herbs, and chewed on sweet stevia leaves.

My favorite part came next, however. The farmer’s wife took us to one of her conservation areas where she has inspired the family to start reforesting the land. She pointed out many medicinal plants that help with everything from menstrual cramps to high blood pressure. She then became uncharacteristically solemn and discussed how hard it has been to educate her neighbors and the people in the area about the importance of conservation and sustainability. She said that many of the adults were very closed to her message, which is why she started working with children. That was actually how she started the project, turning her family’s dairy farm into a classroom on sustainability in Costa Rica.

It was so clear to me that this woman is a true pioneer in Costa Rica. Incredibly intelligent, tirelessly determined, and creative, she is one of the faces of Costa Rica’s dedication to the environment.

By the time she showed us the little cabin they were building for visitors, I was ready to sign up to stay as long as they would let me. And that was before I had the opportunity to share a meal with the family.

The lunch that followed was…spectacular. Let me do my best to describe it to you.

We started by helping make it ourselves, which made us good and hungry. Almost everything the family served us was something they had made or grown in their garden, from the fresh cheese and soft homemade corn tortillas to the crunchy cassava cakes, potato, spinach, and papaya root picadillo hash. Served with rice and beans, this traditional casado dish was one of the best I have ever had.

Everything about this tour delighted us and made us want more. Cute animals, new experiences, tasty drinks, and even tastier food made sure we had a lot of fun. The story behind the conservation project won our hearts.

If I ever have the opportunity to go back to that farm, I will take it without thinking twice.

In the meantime, all I can say is gracias to the family that shared a bit of their life with us for a day.