You are here:
About PapagayoAirlines 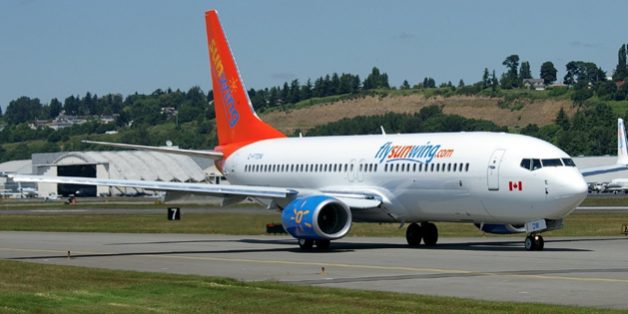 Canadian airline Sunwing intends to offer more connections between North American cities and Costa Rica. As reported by The Costa Rica Star, Sunwing has previously announced flights from Toronto and Edmonton to the Daniel Oduber Quiros International Airport (LIR), which is conveniently located near the Gold Coast beaches of Guanacaste.

According to a report by Juan Pablo Arias of online news daily CRHoy.com and Jaime Lopez from news.co.cr, Sunwing is currently working with the Directorate of Civil Aviation in Costa Rica to formalize its LIR service from Edmonton and Toronto, and it also wants to add Montreal to the mix. The idea is to offer more regular flights on top of the seasonal offerings already in place, which take place during the harsh winter months in Canada.

The Board of Tourism (Spanish initials: ICT) is already working with Sunwing in terms of marketing and information. Sunwing’s in-flight magazine has travel and tourism features about Costa Rica; the next step would include in-flight videos and targeted Internet banner ads. Along with Sunwing, ICT also intends to work with publications such as Travel Weekly, Canadian Traveller and the prestigious Toronto Star newspaper.

If you visit the Costa Rica section of Sunwing’s travel website, you will see the Essential Costa Rica logo, which is the current and official country branding effort used by ICT. Here is how Sunwing introduces its vacation packages to Guanacaste:

Costa Rica means “rich coast” and a more suitable title would be hard to find, particularly as it relates to the country’s excessive wealth and abundance in natural beauty. Bordered on its eastern coast by the sparkling sapphire seas and natural coral reefs of the Caribbean and on the west by the vast, calm waters of the Pacific, the entire country is blessed with vast network of beaches and coves.

The new international airport in Liberia has opened up the huge province of Guanacaste, with its 300 km of warm Pacific shoreline and 70 beaches, to a wider audience. The Gulf of Papagayo is home to many of the province’s finest beaches including Playas del Coco; this was one of the first tourist areas of Guanacaste province.

Other beaches are Playa Hermosa, “beautiful beach”, stretching 1.5 km and well shaded, it’s sheltered by a bay and the water is quite calm; Playa Panama, is a secluded cove surrounded by shade-giving trees; Playa Flamingo is a long ribbon of white sand beach; Playa Tamarindo is a perennial mecca for surfers.

Paper Migration Forms Will be Eliminated at Costa Rica’s SJO Airport as of August
June 23, 2017

New direct flight between Switzerland and Costa Rica on May the 9th
May 3, 2017

New KLM flights to Costa Rica twice a week
April 18, 2017
Our website is quite big, use our Search Tool:
Check our blog!
Write a Review!
Go to Top