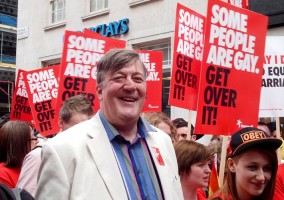 Stephen Fry: ‘I hope this series makes people consider Costa Rica or Guatemala for their holidays’

ITV Press Release – Seven years ago, Stephen Fry travelled through all fifty states of the USA in a black cab. But he’s always been fascinated by events south of the border, so now, in this brand new four-part series, he embarks on an adventure into America’s backyard.

Travelling through Mexico and the entire Central American isthmus, to the Panamanian border with South America, it’s a remarkable trip through some of the oldest civilisations on the planet – Mayan, Aztec and Olmec. He visits some of the most dangerous, but breathtakingly beautiful, countries as he learns all about the people, the places, the wildlife and the history.

In episode four, Stephen’s journey continues through Costa Rica and Panama. In Costa Rica he discovers a country, which is a marked contrast to the rest of Central America. With no army or civil wars it boasts a stable democracy with an enviable living standard that has propelled it to the top of the UN Happiness Index.

In an interview with “What’s on tv” he was asked and answered:

What country stood out for you?
“Central America has it’s fair share of problems, but the country that stands out like a beacon is Costa Rica. Its success is due to the fact that following a coup in 1944 Costa Rica disbanded its army.

“All the money it would have spent on arms, and indeed on a navy or an air force, was spent instead on education, health and other things and it’s far and away the most prosperous of all the Central American countries. And it’s constantly regarded as the happiest country on earth!”

With virgin rainforests teaming with exotic wildlife and stunning natural beauty, it has become a leading light in conservation and ecotourism.

Beginning his journey on The San Juan River, that forms the border between Nicaragua and Costa Rica in the province of Guanacaste, Stephen tries his hand at tarpon fishing with Dan Wise, a retired lawyer from Mississippi, who cites his reason for coming here as being that Costa Rica is the Switzerland of Central America.

At the La Selva Biological research station Stephen learns how to extract the queen from a colony of 4 million leaf cutter ants, meets poison dart frogs and handles the smallest bat in the world who has a nose extension, so it can eat fruit and chocolate at the same time.

He also enjoys Costa Rica’s stunning outdoors by ascending active volcanoes, white water rafting on rivers and experiencing the passion of a derby football match in the capital, San Jose.

At the Clinica Biblica he meets a surgeon who perform keyhole operations for an increasing number of medical tourists coming from the USA and finally, gets up close and personal with baby sloths and howler monkeys at an animal rehabilitation centre.

Crossing into Panama he visits the Guna people to witness the extraordinary nightime arrival of the giant leatherback turtles, as they come ashore to lay their eggs. Taking the train to Panama City he joins in a drug busting exercise and learns how to dredge the canal before bidding farewell to his faithful school bus at the end of his epic journey.