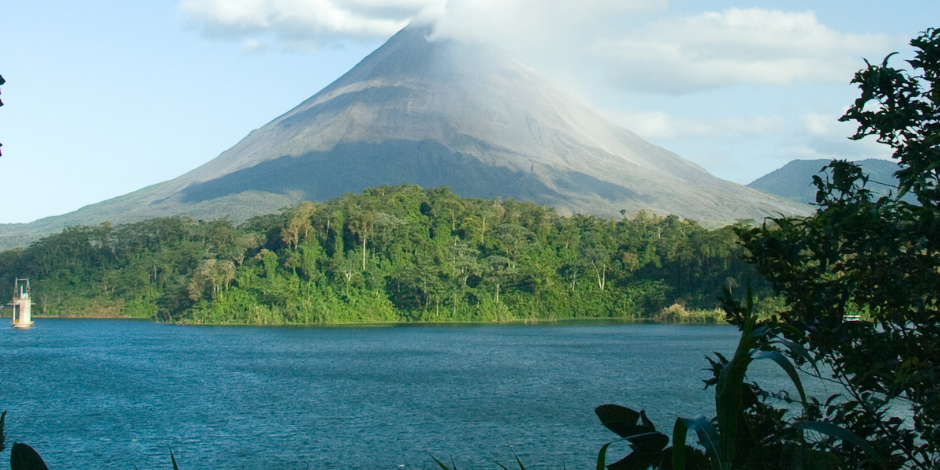 The tour is Poas Volcano, Coffee Tour and Waterfall Garden. A combination that makes you wonder, without a doubt, about how did these three things ended up together in one day… Will it really give us time? Do we really get to see everything?

Well surprisingly… yes! Everything! And on top, we’ll get back to the hotel before sunset! … With an early start of course.

On Saturday we did this tour and there are several things to talk about and tips to know about.

Let’s start with the beginning of the tour:  the early rise… Why? Oh Why on vacation should we start at 7 a.m.? Is there really a need to start this early?

However, in March the volcanoes are an easy bet. We are right in the clearest time of year to see craters and lagoons, and Saturday was not an exception.

Pablo (Our driver) and I picked Gary and Dorothy at the Presidente Hotel (Downtown San José) at 7 a.m. and we departed for the first part of the tour: Poas Volcano.

A lot of people in the streets and you could easily see several cars with packed stuff on… Easter vacation is starting! Definitely! On top of that it is a time in the year where everyone gets vacation: Costarricans get vacation, but Latin Americans in general too, late Spring breakers and thousands of families come over to see the nature wonders that Costa Rica offers… All of them throughout this week! The weather is gorgeous, the temperature is warm and life is good!

So! We got on the Panamerican Highway and got to the city of Alajuela in less than twenty minutes. As we started driving up the mountain… Dark green coffee plantations take over and the view becomes a gorgeous setting landscaped by the hand of nature. Soft hills and pine and cypress trees surrounding thousands of coffee bushes. The coffee plants in this time of year are either trimmed or cut, the harvest just passed and you can see that in the fields. Trucks with coffee wood passed by… Used for stoves and coffee mills the coffee wood is quite popular after the harvest.

As we are going to the coffee tour later on in the day I didn’t talk much about it, except for the usual “That’s coffee”.

A bit higher we have on the left the bizarre looking fern plantations… I explained Gary and Dorothy about the need for the screens that leather ferns – foliage for florists – has in order to protect it from all weather extremes, either strong wind, sun or rain. Ferns need all of that …but in small mild quantities.

And later on in the drive but before arriving to the volcano we started to see the strawberry fields. Dorothy had been raised in a strawberry farm and this reminded her about her childhood in Oregon.

When we arrive to the volcano, the weather was simply magnificent. A cobalt blue sky on top of our head and a bit of breeze moving the top branches.

The Poas Volcano National Park has different heights going from 8,000 ft. to 9,000 ft.   and the temperature sometimes show it… I carried the sweater on my waist just in case (Never used it… as the day was warm and nice).

As the weather was so good, I dared to go first into the information center of the National park and talked to Gary and Dorothy about the underground formation of the volcano.  For us humans as we understand things we enjoy them much more. And volcanoes are not an exception.

We saw in the information center a bit about the pressure contained in the main chimney of the volcano and how is this released through water (In the case of the Poas Volcano) creating phreatic eruptions.

After the necessary explanations, and less than a mile walk and we were at the very edge of this amazing Poas Volcano crater, as clear as can be, we talked about the last eruptions and how the three craters form the big crack that we were looking at.

The forest at Poas Volcano is affected by thesulphur acid rains, nevertheless, still beautiful and I could share some of the information about the huge Gunneras (Poor men’s umbrellas), made to retain as much water as possible through the roughness of their skin and their huge leaf plates, the yellow blooms of the scotch broom, created by the plant to glow over the usual fogs of the high mountains of the country and with leaves turned to spines and the leathery ficus leaves that have such a compact rubberlike surface you can actually write on them.

The rainforest at the Poas Volcano is very beautiful, huge ferns and huge round gunneras, tiny hummingbirds and bumble bees touching the bright colored flowers. However as the day had to continue, we walked through it without stpping at every single wonder that this magnificent volcano has to offer.

As we left the National Park we could stop on the way down to see the breathtaking open view of the Central Valley in all its splendor.

I stop this series here… As short as the weekend with the Lewis was, we saw so much and talked so much that I cannot cover this in one single blog post.

See tomorrow a bit about the coffee tour.