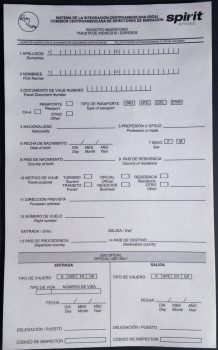 The General Direction of Migration in Costa Rica will eliminate, starting August 2017, the paper forms used for the registry of entry and exit of passengers at the Juan Santamaría International Airport.

Starting August 15 the registry will be made automatically by a digital reading of the passport.

According to the Migration Director, Gisela Yockchen, this is the first of a series of adjustments meant to speed up the procedures at the migratory stations and improve national security. This shift will be achieved also in other points of entry in the near future.

Costa Rica’s migration authorities also plan to install kiosks by 2018 to allow travellers to handle their migration process electronically. These changes will allow the automation of part of the process and will allow the airport to designate more personnel to the checking areas which should also better the attention of tourists.

The greatest challenge in these actions is the creation of a database with fingerprints and photos of the users that will allow the verification of passports.

The Juan Santamaría Airport alone served 4.3 million passengers in 2016 and is expecting 4.6 million travellers this year, it is also serving more airlines than it’s ever had in the past; these changes are necessary as the number of travellers grows to provide a better service.

Backup systems are also on the list of aspects to improve at the Costa Rica airports.