Attention! One of the most amazing wildlife displays on the planet is happening in Costa Rica’s Caribbean coast sky right now: The raptors migration.

As the days get shorter and temperature falls, billions of birds from the North are starting their migration to the South. And while many get very impressive accomplishments of endurance, few create a more fantastic show than raptors, which converge by the millions into what’s known as a “river of raptors.” And one of the best places in the world to observe it is the Kèköldi indigenous territory on Costa Rica’s southern Caribbean coast. 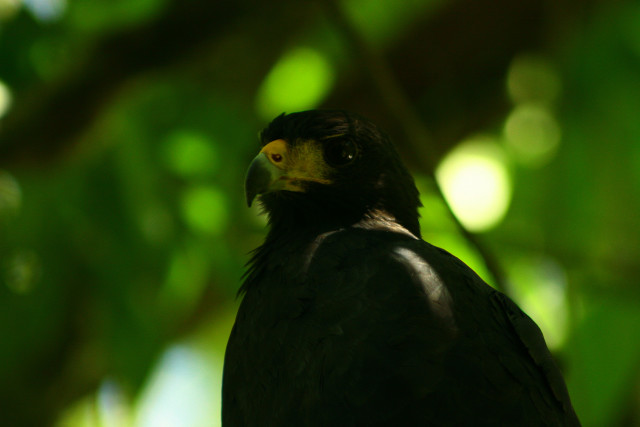 The modern, living birds called raptors are generally (but not always) predators with hooked bills for tearing flesh and strong, piercing talons for grabbing and holding prey. Hawks, eagles, vultures, kites, ospreys, falcons, and owls are all among the birds sometimes considered raptors, or birds of prey, raptor coming from the Latin verb rapere, to grab, to seize, to carry away, which entered English many times over the centuries, also giving us rapid, rapt, rape, rapacious, rapture, ravenous, ravish, and raven.

To preserve energy when migrating, raptors depend on pockets of rising air in the form of updrafts and thermals to help them gain altitude without flapping. An updraft occurs where a steady wind meets an obstacle, such as a mountain, and is forced upward. A thermal is a column of rising warm air that occurs when the ground warms unevenly in the sun; for example, the air over a field will warm faster than the air over a forest, creating a zone of rising air that a broad-winged bird can simply ride upward.

When raptors get in a thermal, they ascend in constricted circles, spiraling upward. As the air increases and cools, it provides less boost, and when the birds reach a sure height they peel off and glide in the direction of travel, slowly losing altitude until they (ideally) reach the bottom of another thermal, where the process begins again. Raptors are generally solitary, but ornithologists believe that travelling in large groups makes it easier to locate thermals. 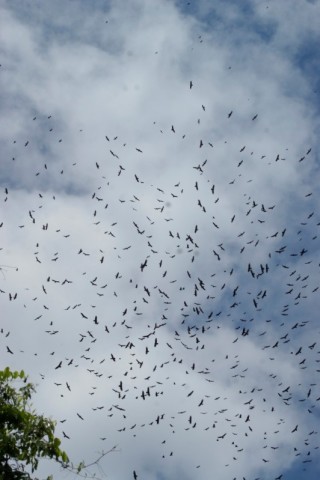 Hundreds of raptors soar in small circles on a thermal to gain altitude. Such a group is commonly referred to as a “kettle,” so-named for its resemblance to something boiling in a cauldron.
(Courtesy of Fundación Rapaces de Costa Rica)

Raptors incline to migrate over level terrain, evading difficulties like tall mountains and large bodies of water (since thermals don’t form over water). This strategy channels them into “flyways,” where they may be able to take advantage of updrafts along the edge of a mountain range or thermals along a coastline, for example.

Where geographic topography conduits migrating raptors into a bottleneck, it’s usual for thousands of birds to pass by a given vantage point in a single day. Five sites (so far) in the world have been identified as “million-raptor watch sites,” places where a million or more raptors can be observed in a single migration season. In the Eastern Hemisphere, we find Eliat in Israel and Batumi in Georgia where dozens of species go from Europe and Asia into Africa. In the Americas, we find Veracruz, in Mexico where the mountains come close to the sea and the raptors get squeezed on a passage of less than a quarter of a mile. This is the most concentrated population of raptors in the World.

After the birds pass Veracruz, they scatter and take diverse routes through southern Mexico and into Central America, some finding places to spend the winter and dropping out from the flow.  When they reach Costa Rica, the country’s mountain ranges pipe them again toward the Caribbean, where eventually the broad Talamanca Mountains press so close to the coast that the birds are forced through a narrow chute just a few miles wide. The perfect vantage point for this is the Kèköldi indigenous territory, where fall raptor counts average 2.5 million per year.

The situation happens again when the birds turn south and fly along the Panama Canal to reach the Pacific coast, crossing over Panama City, where raptor counts are held at Cerro Ancón. 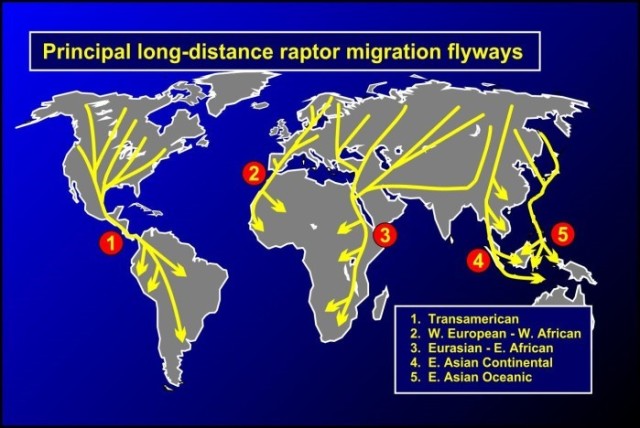 So, it is right now, that we have this amazing occasion to see thousands and thousands of raptors at once, as it happens for less than a couple of weeks every year, in the Caribbean Coast area. You can create a customized package to go witness this unique nature event, stay in gorgeous hotels and do several other activities in the area if you like. Just contact us and make this great even a memory forever