This is the time to get in and book your cheap airfares to Costa Rica! Right now Boston-Costa Rica is for less than $340… Not to last long but it is a great time to go for your dream trip to the rainforest and the tropics! 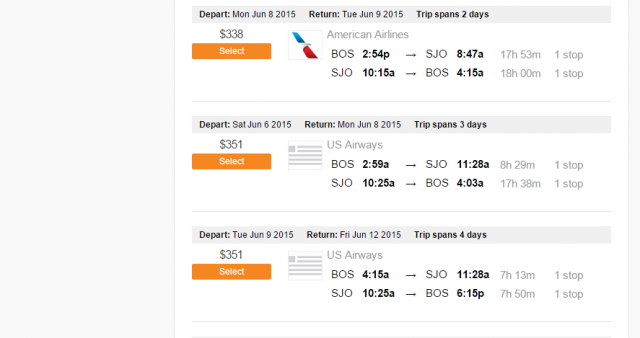 During a few weeks in June and July, low airfare hunters flock to select websites in search of travel deals to Costa Rica. Finding these deals takes a certain amount of skills and luck; to this end, joining an online community of bargain hunters will greatly help. Take, for example, the flight shown on the screenshot included in this article: Round-trip from Boston to Costa Rica, departing on September 22nd and returning on September 29th. This $370 flight features one stop on each leg, and it calls for an economy seat for one adult traveler.

The flight above was found by means of an online search on Kayak.com, one of many search engines for air travel and vacation planning. The Costa Rica Star found this flight based on an alert by TheFlightDeal.com, which is an online community of bargain hunters. The original alert by The Flight Deal was for a $395 BOS-DFW-SJO round-trip flight that could be booked now for traveling on certain dates from September 2015 to February 2016. We found a slightly lower fare by sheer luck.

Many of the fare alerts published on The Flight Deal require travelers to use Matrix by ITA Software, which is an online booking and reservations system often used by the travel industry. Matrix may appear a bit complex to beginners, but once you learn the system and get the hang of it, you will not only discover deals but also save time when proceeding to search and book on sites such as Kayak, Priceline, Expedia, etc. Another idea is to go directly to the websites of discount airlines.

Seasoned bargain hunters know that the low tourist season in Costa Rica makes it more likely to find interesting travel deals. Some air carriers are bound to become competitive during this time, and they will pay close attention to Matrix to see if they should run special offers as well. It also helps to keep an eye on news publications such as The Costa Rica Star, where we publish press releases from travel providers who advertise discounts and special offers as soon as we can. For example, not long ago we published the following air travel deals by Mexican airline Volaris:

Taking prompt action on special offers is crucial for bargain hunters. Special offers tend to be short-lived affairs, which is why the sample airfare in this article may be gone by the time you read this.