Volcanologists from the University of Costa Rica’s National Seismological Network (RSN) and Ovsicori reported a new series of eruptions of Turrialba Volcano that started this week. 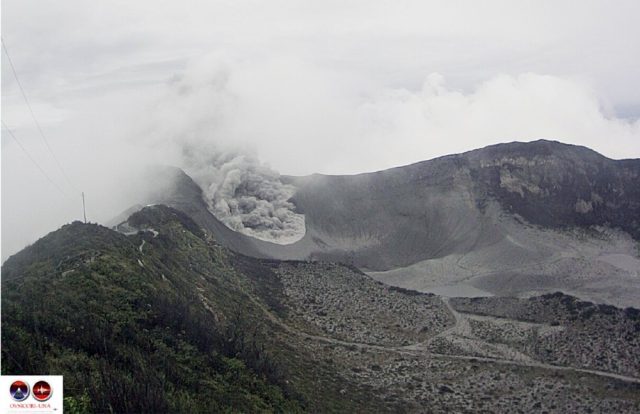 The explosions have expelled ash and vapor more than 1 kilometer high above the crater and last an average of 10 minutes.

RSN volcanologist Mauricio Mora said minutes before the explosions, instruments at various nearby stations record a strong tremor around the Turrialba area.

Ash has continued to spew from the crater today as we can see in the most recent video of Ovsicori. (Below)

Wind direction is heading west and southwest from Turrialba. Therefore ashes from the explosion reached communities in the northeastern part of the Central Valley.

The National University’s Volcanological and Seismological Observatory of Costa Rica (OVSICORI) said ash is expected to spread throughout a 50 km (31 miles) radius around the volcano, which is located some 50 km east of San José.

Activity at Turrialba Volcano had been muted in recent weeks following a very active period that started after strong explosions on April 30.

NO Camino Travel passengers have been affected by this new activity