You are here:
About our diversityBlogRainforests 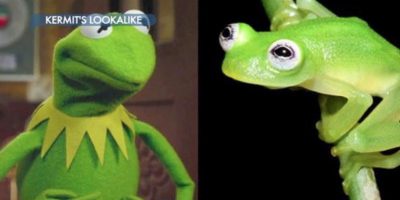 Earlier this week everyone was agog with news of a newly discovered frog similar in appearance to the world’s beloved Kermit, the famous Muppet. Scientists found the species on the Caribbean slopes of Costa Rica. It was big news for the science community, seeing as last time a new glass frog was found in Costa Rica was back in 1973, according to the Costa Rican Amphibian Research Center.

But it was big news for everyone else because the bulging white eyes with a dark center, and Kelly green skin of the “Hyalinobatrachium dianae” resembled everyone’s favorite amphibian Kermit.

Disney interviewed Kermit about his new doppelganger.  In the official Q & A  Kermit explained that the reason why there is so much shared resemblance with new frog is that her mother and his mother are sisters; “it’s a family resemblance.”

Kermit acknowledged that “googly eyes” run in the family, but so does stardom — for which he offered some advice.

He told the Hyalinobatrachium dianae, “Shorten your name if you want to make it in show business. Maybe something catchy like Diane Glass or Kermina Kardashian.”

Speaking of stardom, it turns out Piggy doesn’t want to share the spotlight, according to Kermit; “she’s just jealous that this new frog is getting more publicity than her.”

Per Costa Rica, it turns out Kermit has almost crossed paths with the glass frog, having been down there and run across “a virtual plague of cousins.”

The biggest distinction between the two might be tonal. The study described the frog’s “advertisement call” as “a single tonal long metallic whistle-like note.”

Kermit said that is call sounds like whichever ringtone he downloaded most recently.

His default call sounds like this though, he said: “Hi ho!”