Gray-necked woodrails are awesome (And kind of obnoxious) 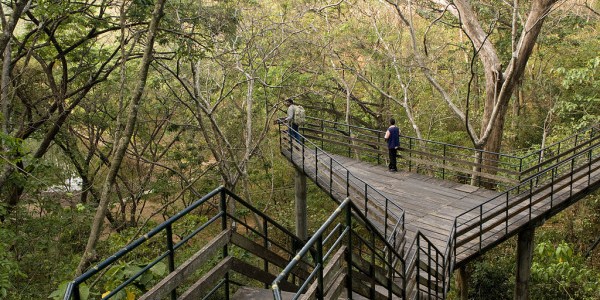 On our first morning at Finca Luna Nueva Lodge, Mike and I were making our way to the tower in the pre-dawn light to see what we could find from the level of the canopy. En route, we walked past the open-air restaurant where guests at Luna Nueva take their meals. And were we ever surprised to see a Gray-necked Wood-Rail, the first I had ever seen, cross our path and enter the restaurant! It was as bold as can be though once it noticed us noticing it the wood-rail lost its nerve and darted out the other side of the restaurant and into cover. Mike and I were pleased with the sighting and looking forward to the chance to see more wood-rails. We would have our chance later that morning.

After some time in the tower we got hungry and headed back to the restaurant. While we ate breakfast we watched two wood-rails foraging at the edge of the forest, occasionally coming out to eat some of the fruit that had been put out onto the grass as a makeshift feeder so we could enjoy the tanagers, honeycreepers, and other birds that birders in the Neotropics are so eager to see. We exclaimed over the wood-rails’ willingness to leave cover, their bright colors, and their dissimilarity to the skulking rails of marshes that we are used to. All day long, whenever we passed that area, we would see one, two, or even three wood-rails foraging at the edge of the forest.

What’s not to like about a bird this elegant? Nothing! At least, nothing so long as they are around…

The next day was the day of the Arenal Bird Count and we were assigned Finca Luna Nueva and some of the some surrounding area for our territory. Despite having six birders scouring our turf and seeing or hearing a total of 126 species for the day we failed to detect a single Gray-necked Wood-Rail. It’s almost as if they were intentionally avoiding us. To make things worse, when we got to the compilation dinner and went through the list with all of the other groups, we learned that no one had seen a wood-rail all day long. What kind of absurdity is that?

So, of course, the very next day Mike, Patrick, and I spotted a pair on the grounds of the Arenal Observatory Lodge. Because, you know, Gray-necked Wood-Rails are the most obnoxious creatures ever. Despite their awesomeness.

Mike and Corey were hosted by Finca Luna Nueva Lodge for four nights in order to see the birds that visit both the working organic farm and the preserved rainforest on the property of the lodge.

It’s important for Camino Travel to say that the Gray Necked Wood-Rails are quite easy to spot in other areas of the country as Tortuguero, Arenal, Sarapiqui, and mostly around the Costa Rican lowlands.