“Escape to Costa Rica” a documentary created by Gaia Vince. Here the interview of Channel 4 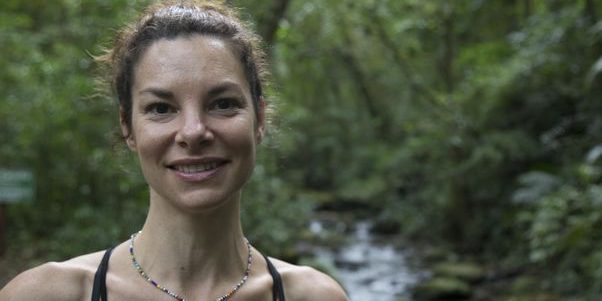 “Escape to Costa Rica” by writer and traveller Gaia Vince takes viewers to explore this wonderful country. Vince and her family settled in the Pacific of Costa Rica for three months to find out why it is considered one of the happiest and most sustainable countries.

You’ve made a new series, Escape to Costa Rica. What’s the show all about?

It’s about a few things. At the moment we’re living in a time where humans are changing the planet in a way that has never happened in 4.5 billion years. There was a time, like the Jurassic period, when dinosaurs ruled the world. This is what scientists are calling the Anthropocene Age, where humans are ruling the world. That’s great for us, we’re doing really well, living longer and better than before, infant mortality is lower, most of us have enough to eat. But for the natural world, it’s not so great. The extinction rate is higher than ever, we’re entering the sixth mass extinction in the world’s history, climate change is affecting oceans, land, food production, we’re changing the way rivers flow, we’re polluting the atmosphere, all these sorts of things, and it can feel a bit bloody miserable and desperate, and as though this is kind of inevitable, it’s all going to shit.

Any chance you can say something to cheer us up now?

Well, funny you should say that because actually, there is a tiny country in Central America that made a conscious decision to turn it around. They decided that, as one of the most deforested nations on earth, they would plant trees. They would conserve and protect wildlife and fight back against climate change by looking at renewable energy, at the same time as developing their economy. And they would do it in a way that would look after the people. Remarkably, in just a few decades, they have done it. They’re the only tropical nation ever to have reversed deforestation. They protect more than a quarter of the wildlife. Almost 99 percent of their electricity comes from renewables. Plus it’s the happiest nation on earth. In the Happiness Index survey, Costa Rica comes out the top. Costa Rica is one of the places in the world with the highest proportion of the population living to 100 years old. Education and healthcare are really great. And this is in a really poor, developing country, squashed between failing nations. How on earth are they doing it? If they can do it, how inspiring is that? We can choose our future. We can dictate what sort of planet we want. I’m really interested and passionate about what’s happening there, and what our future’s going to be. It’s really important that human happiness and development is coupled with protecting the natural world. I think Costa Rica has been really pragmatic, they’ve looked at how it can work for people as well as the environment, and that’s the only way we can do it. If people don’t buy into it, it’s not going to work. So that was why this was important to me.

It helps that it’s also quite easy to the eye…

Yes! It’s beautiful, I’d been a few times before, so I knew how beautiful it is. It’s got volcanoes, rainforest, cloud forest, the wild waves of the Pacific and the beautiful Caribbean beaches. It’s got sloths, monkeys, jaguars, tapirs, it’s got indigenous people, the Latino culture, incredible rivers, it’s got everything. And it’s tiny – the size of Denmark.

Why you? What are your credentials?

I started off as a Scientist a long time ago. I did chemistry and then engineering, and my passion has always been communication and stories: Engaging people in the stuff I find interesting. I wanted to tell stories about people and our world. I worked at the Science Museum as an explainer a long time ago. And I moved into radio and writing. So I went around the world for two-and-a-half years, looking at the world and how things are changing, how huge human influence is on the globe. There’s no part of the planet that’s untouched by humans now. So I wrote a book about it, Adventures in the Anthropocene. I blogged as I went round, and my partner took a lot of pictures, and I did a bit of video. But these stories need an extra dimension to come alive. I think they work well on the page, they’re interesting to read about, and it’s interesting to look at the pictures, but to really understand how people are relating to their changing world, you need to see the people doing it, and to see these extraordinary landscapes. I think TV offers that extra dimension.

How long were you there for?

Three months. We lived in a house on the Pacific.

Why did you decide to take your family with you?

Partly because my kids are one and three, and I‘ve not been away from them for more than a couple of nights since they were born, and I couldn’t be apart from them for that long. I could have maybe worked with me going back and forth a little bit, but it would have been tricky. But mainly because Costa Rica is incre3dible, and this is their future, this is their world. I want them to see how incredible it is. They live in London, and while squirrels and ducks are incredibly exciting, there’s more in the world than them. I wanted them to see a world where nature is in control. London is a very human world, where we control how it looks, and what plants and animals live there. I don’t know if they’ll remember it but hopefully it’ll give them a slightly different perspective.

What did they make of the experience?

They loved it. Who wouldn’t? They went to the beach every day, they had monkeys playing on the roof, iguanas and lizards in the garden, trees with leaves bigger than them, sea snakes, frogs, sloths. They loved it.

You mentioned that Costa Rica is often found to be the happiest country in the world. Did it feel like that to you? Was it a tangible thing?

It’s difficult, because it’s very subjective, but it did feel like people were very friendly. I think generally people are more friendly when you leave cities. They slow down and have a bit more time for you. But yeah, people did seem happier. In one of the episodes I really look at this question of happiness, and what I took from it was community – people still live very integrated with their families. Even in the cities, community is very important, and people collaborate a lot. It gives people a sense of place and purpose. Plus their diet’s really good, they have this incredible relationship with the natural world, they feel a real connection with their environment.

You did some pretty wild stuff there. Were you scared at any point?

Yeah, totally. I’m embarrassed about how un-hard I am. It’s good to be scared every now and again, to push yourself. Not of some horrible nebulous thing, but physically push themselves when they’re not sure about something.

So what were you scared of?

Well, I got into a pond full of fish, containing at least three large crocodiles, which was either very brave or very bloody stupid. And the point of it was to walk towards the crocodiles and catch them. Luckily that ended well, I still have two legs. The lake was full of Tilapia, which are quite big and aggressive fish, and they’d crash in to my legs and try and bite me, and I the water was very murky, so I never knew if it was a fish or a crocodile.

Oh yeah, being really embarrassingly crap. I was up there, and I had to climb around and over to a tree trunk, and I had nothing to hold on to, and I really didn’t think I could do it. When I get really scared, I don’t really trust my legs to work, they freeze up a bit.

You got to meet the president. That must have been pretty extraordinary.

I’ve got a lot of respect for him. He’s really personable, really interesting. He’s taking some very difficult decisions. Costa Rica wants to be carbon neutral by 2020, it’s got loads of hydropower and amazing rivers. They could dam them all for hydropower, sell all that, and become this massive energy economy. But at the same time, they’re committed to protecting their natural environment, and every time you dam a river, you completely change it, and you have to have loads of infrastructure around it. Anyway, he made the decisions not to dam one of the world’s last big, untapped rivers, and that’s a difficult decision to make. I think he made the right decision, but a lot of people don’t. I have a lot of respect for him. We could do with people like that in our government.

You got to feed a baby sloth. Is there any better experience on earth?

Oh my God, no! Why do I not have a basket of baby sloths in my house right now, that’s what I want to know. They are so gorgeous, and they have a sort of permanent smile. That’s just how they’re made – smiling.

What were the best things about being there?

So many. It’s just really nice, being in the tropics, among tropical trees, animals, plants… I love the coast, the beach, I love waves. It’s just wild and beautiful. I love Costa Rica. I’m definitely going back.

Were there any drawbacks about being there?

I missed friends and family, and you normally have a bit more of a support network with your kids.

Did it make you feel more optimistic about the future of the planet?

Well, it shows that we can actually make a difference. If we ask ourselves what sort of a world we want to live in, what sort of environment we want to keep, what path we want to take, long term, we can do that and make it happen. Costa Rica does it, the Netherlands does it a bit, but most countries don’t think that far ahead. So their way of thinking long term made me more optimistic. But I was out there while Donald Trump was on the road to the presidency, and at the same time as Brexit, so any optimism was balanced out by other events.