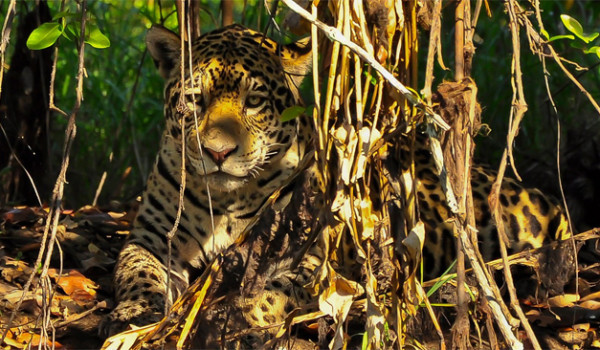 Costa Rica is a tropical mountainous country that is part of the Central American Isthmus making Costa Rica a land bridge between the two great continents of the Americas. This land bridge sees migrations from north to south and vice versa. Costa Rica contains both tropical and subtropical climates with an array of varied geographical landscapes and eco-habitats. There are 16 microclimatic zones in Costa Rica that provide numerous unique habitat zones.

Costa Rica while only being approximately 0.1% of the world’s landmass contains 5% of the world’s biodiversity – a stunning selection of exotic wildlife, with an estimated 500,000+ species. Costa Rica has 26 National Parks as well as a number of reserves refuges and sanctuaries, which cover more than more 25% of Costa Rica’s total landmass.

Jaguars, Tapirs and the Squirrel Monkey are some of the rare and unique mammals that have landed on the endangered species list of Costa Rica. These species can only be found in the deep, remote and untouched tropical forests of Costa Rica.

The jaguar with its camouflage coat has the ability to move through the jungle like a ghost earning it a mythic status among indigenous peoples throughout its range. The jaguar moves freely and silently in the jungle underbrush or high in the canopy but can most commonly be seen along the edges of rivers – you cannot sneak up on or surprise one of these deep jungle apex predators. According to many indigenous people, the Jaguar only appears when he wants to be seen.

The name jaguar comes from an Amazonian word, yaguara meaning “beast”. A more specific word for jaguar is yaguareté, the suffix -eté meaning “true”, so a translation would be “true beast”. Jaguars (Panthera onca) are the third largest of feline species and are the only panther species found in the Americas. The largest of Central American carnivores, the jaguar is rarely seen due to declining populations and habitat loss. There are only an estimated 14,000 wild jaguars remaining in Latin America. The jaguar’s range extends from Southwestern United States to northern Argentina.

Although the pristine habitat of Costa Rica’s Corcovado national park is ideal, the numbers jaguars in the region were only numbered to 40-50 (base on a 2004 report). Recent estimates are indicating an improvement because of the work now being done to preserve animal corridors.

Another area for spotting jaguars but less known than Corcavado, is in northern region around the Tenorio Volcano National Park. Home to the famous aqua blue river, Rio Celeste, this area around the small town of Bijagua is flanked on one side by the Tenorio Volcano and Miravalles Volcano on the other side, and so offers a large swath of protected jungle habitat where jaguar and puma sightings are reported.

Habitats and Corridors for Endangered Species

There are a number of wildlife sanctuaries in Costa Rica like Corcovado National Park, Ostional National Wildlife Refuge, Carara National Park, and the Barra del Colorado Wildlife Reserve that protect critical habitats. These parks and sanctuaries do allow tourist into the protected areas. In most cases these tours require registered guides and numbers of entries are limited often requiring an entry permits in order to protect the habitat and species living there. Some of the rare and endangered species found in these reserves and sanctuaries include the Scarlet Macaws, Coyotes, Anteaters, Otters, Collared Peccari, Ocelots, Pumas, and Margay Cats.

Costa Rica has seen a number of corridor protection programs in recent years. These corridors are critical for the ongoing protection of endangered species allowing migration movements and range extension. Without these corridors many species become cutoff in isolated pockets, which leads to extinction.

How hard is it to spot a jaguar?

Hard! Although, as an interesting fact in certain protected areas (National Parks) as Tortuguero and Corcovado, they have been more visible in the recent times as poachers and hunters have dissapeared. So, if incredibly lucky… you may see it, swimming across a canal in Tortuguero or walking on the beach in Corcovado.