You get to the first rainforest lodge, or, at least, walk on your first rainforest trail. You have the proper clothes, bought guides and binoculars and are excited about seeing the real wildlife in Costa Rica. But ah! A group comes by the trail, laughing and shouting, and you feel all wildlife is gone, forever, from this path.

Well! That picture is not necessarily true.

It may happen, that a group of loud humans will scare off some of the wildlife on a trail. Many animals would look at them, from up above, in the canopy and think (Probably with a little disgust) “Humans!” and go on with their lives.

This post is not aiming to be a scientific guide to what you may be able to see in Costa Rica. It’s a simple guideline to most usual animals to expect when coming into the Costa Rican rain forests and regions.

Read also: 10 Reasons to travel to Costa Rica with children

What wildlife in Costa Rica might you be able to see effortlessly?

A tourist once asked a guide when talking about the next day “What animals are going to see?” His sarcastic answer was: “Would you like the list in alphabetical order or by apparition order?”.

Wildlife in Costa Rica is tremendously diverse, and it’s impossible to say something like:

“We are going to see two species of monkeys, an anteater, a group of coatimundis, two toucans, and six hummingbirds”…

Us, guides, wish we could! But no. It is impossible. We may say then: “In the region there are such and such animals, and we might get to see these and those.”.

But even saying that is risky since you don’t want to overpromise wildlife sightings as they are truly unpredictable.

You may also enjoy: 10 tips about the weather in Costa Rica

So anyways! Having said that, what wildlife in Costa Rica is easy to spot? 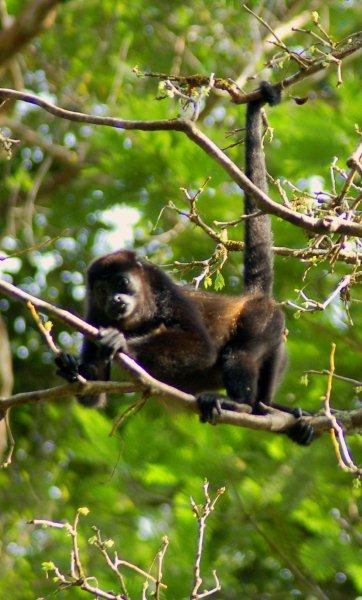 Monkeys… Howler monkeys especially (All over the country, except for the cities, of course). Depending on where you go you might see the white faced capuchin monkeys (Caribbean Coast, North Areas, Central, and South Pacific) or squirrel monkeys (South Pacific).

Sloths: Two-Toed Sloths and Three Toed Sloths are easy enough to spot all over the country (Except for the major cities) if you know where to look.

In the case of monkeys, you have to be noisy to scared them off, especially if they are eating or sleeping. Yes, if they are in the surroundings, and your group is noisy, monkeys will find an alternative route to run away from possible noise danger. And well! Yes! Loud sounds mean danger.

Sloths: Poor things! Won’t move fast enough!… But, if you are a noisy group and spot a sloth on a tree by the hotel, chances to see it later on in the day… if the group is noisy and obnoxious, are little.

And then, there are a bunch of small mammals, like Coatimundis, mangrove raccoons, agoutis, and anteaters to name a few, that are easy to spot, but not super common.

Elusive, again,  if you are too noisy.

You will probably enjoy: Do you know why Jurassic Park happens in Costa Rica?

Keel Billed Toucan (Fruit Loops one) and Chesnut Mandibled Toucans, the smaller aracaris (Two species of aracaris) and maybe if lucky, if you are at higher altitudes, the Emerald Toucanets.

You may find some of them everywhere, like the Rufous-tailed Hummingbird. But depending on where you go there are different and rare varieties with the most unreal colors. 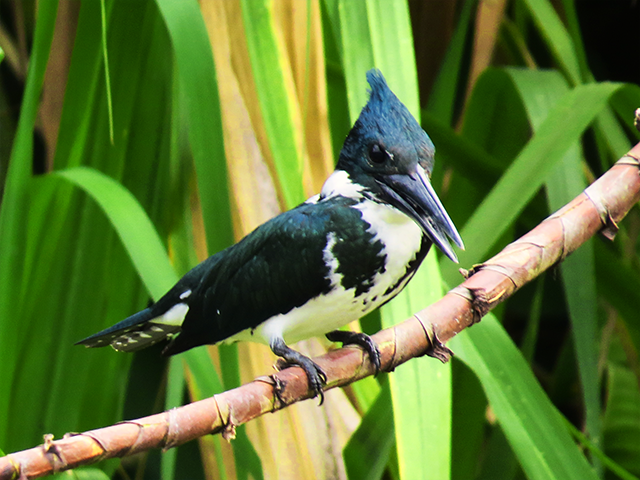 Herons and egrets are pretty common and easy to spot:

The most common ones are:

Kingfishers: There are six species, and depending on the area you are visiting you may see one or the other.

Other birds that are amazing to watch:

Tanagers, Honey Creepers, and Flycatchers: Some of the most colorful and easier to see birds in Costa Rica, black and bright red, blue, yellow and green…

There are many species and some of them breathtaking in their beauty.

Resplendent Quetzal: The mighty symbol of the Mayan god: Quetzalcoatl…

Quetzals are a matter of place and season. Monteverde or Savegre are the best places to spot them, in their favorite fruits season.

And what about reptiles?

Well! Depending on where you are they are also quite easy to spot: 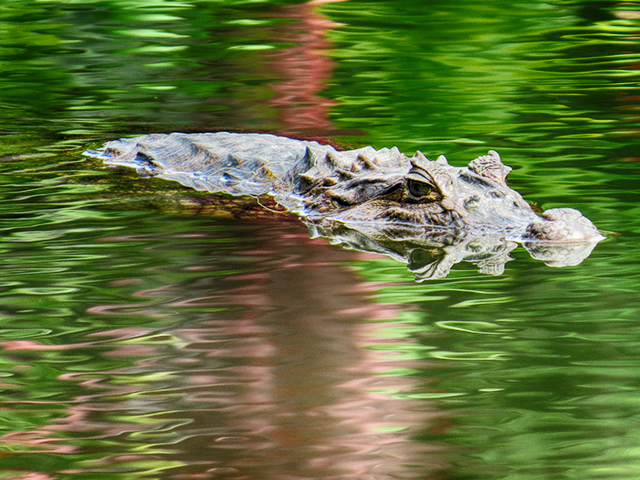 Among the crocs: American Crocodiles and Spectacled Caymans.

Together with turtles, if you are loud forget about them, they will go in the water as fast as possible.

The Green Iguanas are all over the Caribbean and in the North, Central, and South Pacific. Black Iguanas (Ctenosaurs) are on the Pacific side.

They are more used to humans, but they will run away if they feel they are in danger. Some of the green iguanas in places where they are fed, have lost their fear to humans and are easy to see from close range.

Basilisks (Jesus Christ Lizards) on both sides: If you are on the Caribbean side they are Emerald Green, and on the Pacific Side, brown.

Difficult to spot, they blend in well. Although their primary reaction is to freeze before running away.

And then, of course, there are the hidden gems of the wildlife in Costa Rica: 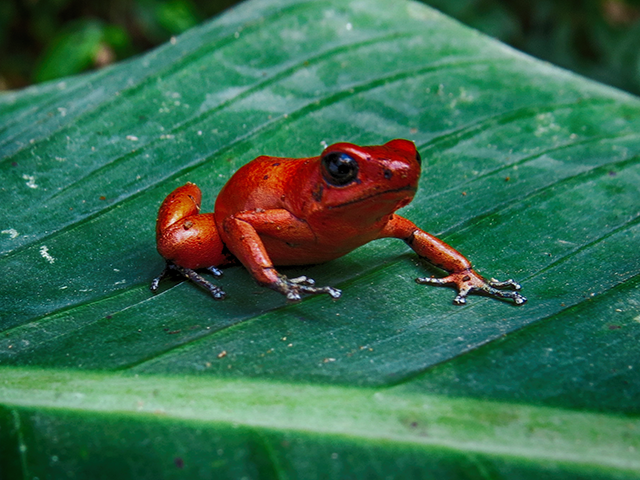 Red, turquoise, yellow, bright green orange and blue… Their colors are as bright as the creatures are small, some of them not even an inch. You can find them in the humid rainforests, and depending on the species, on one or the other side.

Some of them are hard to spot. They blend in well and, on the other hand, as they are small, most likely they will get under the leaves…

And believe me, you do not want to be turning leaves up… A snake might be your surprise.

Oh yes! And the snakes!

Some of us, love them, some people hate them. Mostly everybody fears them. We have 136 species; only 18 are vipers. Easier to see them in the lower areas than up in the mountains.

Fer de Lance snakes might be seen, sometimes, on the side of trails, camouflaged in the fallen leaves, curled up, enjoying their digestion nap. You have to watch it with this one. They can be pretty aggressive if they feel they are in danger.

Many others are quite common (Not super easy to spot them, but usual) like Eye-lashed vipers and Corals (Both small usually and venomous), Boa Constrictor and Vine Snakes.

They are elusive if they feel in danger and will run away as fast as possible.

And then, the insects… Mosquitoes, yes. Except for higher areas, they are everywhere, wear your repellent at all times. 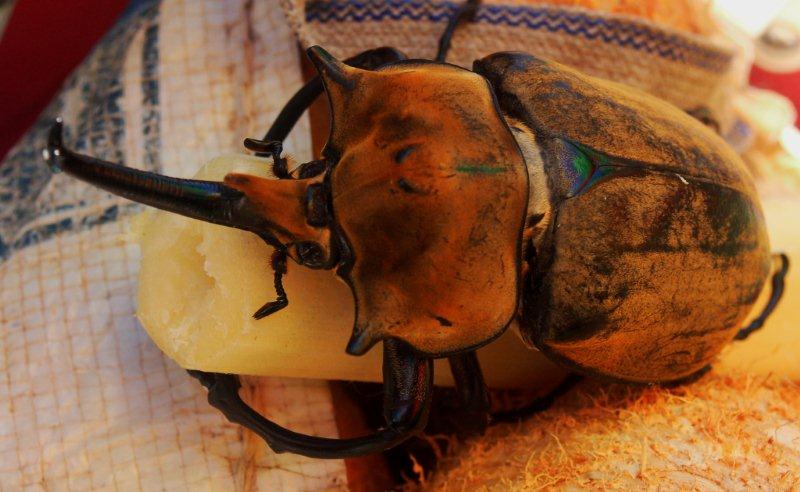 There are some brightly colored insects, some huge (like the Hercules beetle in the North Caribbean areas), some are gorgeous like the Golden beetles (On the Talamanca Mountain Range), and of course, there are magnificent ones, like the Morpho butterfly (Not that hard to spot). And well the widespread leaf cutter ants, that you can see on almost any trail of the lowlands.

Now… I know what you are thinking:

Ehhhmmm… Hardly. An actual T-Rex is probably easier to spot than a jaguar… Ha! Kidding!

No, seriously… If you see a jaguar or a tapir consider yourself lucky. 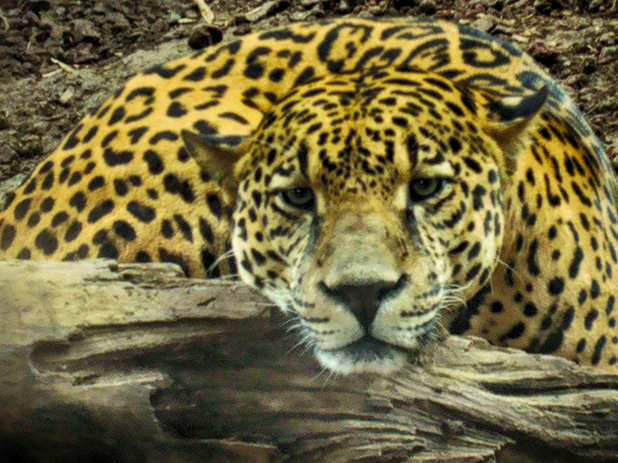 Although, I must say: These elusive creatures are a bit easier to see lately, as the protected areas have grown and hunting was declared completely illegal everywhere in Costa Rica.

But still, if you see a jaguar… Get a lotto ticket, most likely you are going to hit the Jackpot!

Wildlife is a magnificent thing to watch. For some of us, every time you spot an indifferent and innocent animal in the rain forest, it feels like you are touching something sacred. Like watching heaven from a remote window. For some other people might be an exotic feeling, a check mark sometimes. Or a great picture to share on Instagram or Facebook.

Whatever the feeling, spotting the wildlife in Costa Rica is great!

Read also: A walk in the rainforests of Costa Rica? Two indispensable words.

We just have to know the rules to enjoy them:

Clothes in mild colors: Make them Earth colors if possible, but if not, at least, blues… Red, pink, orange, etc. are extremely visible and well! You do want to blend in if you want to see wildlife.

Repellent: Do not spray yourself while on the trail. Period.  If you need to, use cream repellent, if you don’t have any cream repellent with you, spray it in your closed hand and spread it on your skin like an ointment.

Optical Gear: Binoculars are always a good idea. Usually tour guides have telescopes with them for you to watch the wildlife and birds up in the canopy.

Stay on the trail: Yes, I know! Sometimes it just feels like following the one animal that seems to be so cute or interesting… Don’t!

Rainforests are magical, beautiful and cool when you are on a trail; you are with a guide, repellent and a bottle of water in your hand. And especially nice when you know for sure that a clean bed a good meal and maybe a cold beer will be waiting for you at the lodge.

If you get lost in it, it turns into a green hell, dangerous and scary. Stay always, at all times on the marked trails.

Guides, books or plates: Always a good idea to identify whatever you are looking at.

And well! The logical ones!

Do NOT feed the animals. None!

By feeding, you will harm them, badly.

When you give food to the wildlife, you are reducing their life expectancy, modifying their behavior towards humans and their own species, causing them physical pain and threatening a system that is already perfect as it is.

Do not feed any of the wildlife in Costa Rica… Or anywhere!

And please do not litter. Not even involuntarily! Pay attention and whatever you drop, please pick it up and take it to the trash can in the hotel. (Sometimes you will find trash cans in the National Parks entrances also)

When I used to guide in Tortuguero, now and then it happened that for one reason or another (Too hot, too rainy, too early, too late… Really, whatever) we went on a tour and didn’t see many animals. Maybe a sight of a branch moving with an elusive monkey, perhaps an egret flying by… And when we came back to the lodge, the usual comment was: “We didn’t see anything” to say that we didn’t see animals.

Whenever that happened in my tours my answer was the same: We saw a most amazing life system, breathtaking landscapes, a unique rainforest (All rainforests are unique in their way) and gigantic trees. And well, very few animals…”.

Please, when you are looking for wildlife… Don’t miss the forest for a monkey picture. The monkey is exotic. The rainforest, well seen, is pure and unforgettable beauty.

Written by Olga Sáenz-Carbonell for Camino Travel – About the author