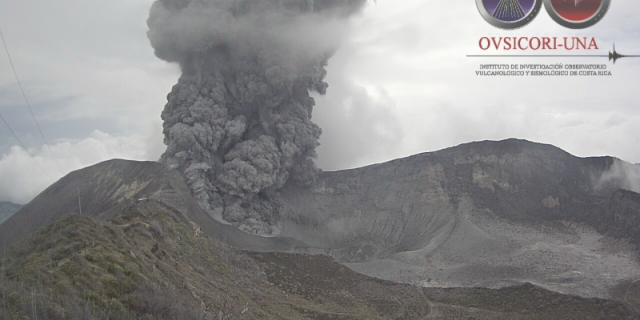 As of this writing, a total of 13 inbound flights to Costa Rica were affected by the decision to close the airport because of ash that fell on the runway, according to Aeris spokeswoman Silvia Chaves. Ash on the runway can make landing dangerous and damage plane engines.

There were no details available at this time on how the eruption might affect outbound flights.

Overnight, 100 workers swept and vacuumed the runway to prepare it for operation Tuesday morning.

The ash from Turrialba Volcano has forced operators of the Juan Santamaría International Airport, outside Costa Rica’s capital city of San José, to temporarily close, affecting at least seven inbound flights. According to Silvia Chaves, a spokeswoman for Aeris, the company that operates the international airport, seven inbound flights are either delayed or cancelled until further notice. That number could change in coming hours, she said. No outbound flights have yet been affected.

At 3:25 p.m. Monday the colossus sent a tower of ash and gas 2.5 km high. Ash from the eruption is expected to reach the capital, San José, the National Emergency Commission (CNE) posted on its Facebook.

No Camino Travel passengers or tour operation have been affected.

These are breaking news and we will keep updating.