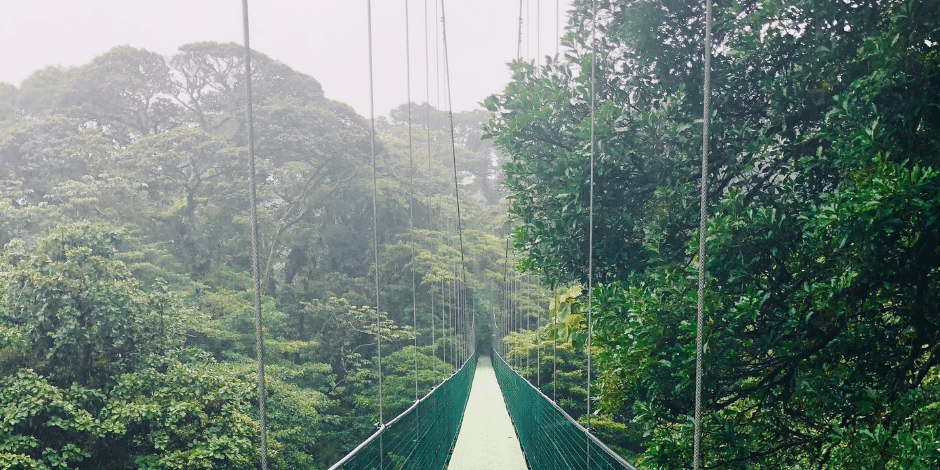 How Rainy is Costa Rica in July?

While we have definitely started the rainy season by July, you may experience something we call the “little summer.” There are usually two sunny weeks at the start of the month, or sometimes in the middle. Interestingly enough, the little summer often coincides with the Costa Rican school system’s mid-year vacation. (Fun fact: Summer vacation in Costa Rica is in December and January).

Besides the little summer, it will rain in most regions during this month. However, that shouldn’t dissuade you if July is your month for vacation! Nearly all activities can be enjoyed just the same as during the dry season. Since a lot of Costa Rica’s most beloved tours involve water anyways, there really isn’t much difference!

The main time activities may be canceled is if a tropical storm sweeps in with lightning, which can pose a risk to participants. As a tropical country, this is always a risk. However, most of the time, everyone gets to enjoy their activity just the same!

And, of course, if you are very rain-averse, look to regions like the Guanacaste coast, where it still rains, but much less than other regions.

Because of its geographical characteristics and its position on the planet, Costa Rica has peculiarities in its territory that generate multiple microclimates throughout the country. This allows you to choose the best areas or regions to visit according to the environment you prefer and the experiences you want to live. The coastal areas are usually hot, and the highlands are ordinarily cooler. The Caribbean Coast and almost all Northern Areas are generally hot and humid. As you travel south on the Pacific coast, moisture levels rise. And when it rains, it pours.

The more humidity and rain there is in a region, the more active wildlife is and the greener the environment will be.

Costa Rica’s Caribbean coast stretches from Tortuguero in the north to Puerto Viejo in the south.

The Central Valley at this time will be at its maximum green, the rains will be frequent in the afternoons, but the temperature will be cool. The nights are usually cool and with high humidity. This region has influences from the coasts. The Caribbean Sea and Pacific ocean influence the climate of the valley.

While the Southern Pacific region of Costa Rica reaches along an extensive coast, Puntarenas, Manuel Antonio, Dominical, Uvita, and the Osa Peninsula are the most commonly visited areas.

Monteverde may be a small region of Costa Rica. Still, it has a unique enough microclimate to merit its own section here.

Guanacaste is the driest region in Costa Rica, which is why it would be normal to think it does not rain. However, there are usually quite a few rainy days starting at the end of June.

What to Wear in Costa Rica in July

In Costa Rica, the mornings will likely be sunny. In the middle of the afternoon, it starts to rain, which usually ends by the evening. The main packing rule for July vacations is versatility. Costa Rican temperatures in July aren’t usually extreme, so light coats, windbreakers, waterproof jackets, and shoes that can get wet are the best option for tourism. Warm weather clothes, a bathing suit, sandals, or walking shoes still work great for the coast.

It’s worth noting that, as a tropical country, when it rains, it doesn’t get cold, at least not by US, Canadian, or European standards. If anything, here it gets muggy when it rains. Bring your rain jackets, but don’t worry about coats or other warm clothing.

Jacó, Playa Hermosa, and Esterillos: are the main beaches and the most visited due to their proximity to the capital. However, the Nicoya peninsula has beaches like Nosara, Santa Teresa, and Sámara that are very popular for practicing this sport.

Starting in June, many marine animals migrate from the cold waters to breed their offspring and reproduce in warmer waters. Due to its position on the planet, Costa Rica welcomes humpback whales, dolphins, and other animals during this time.

You can see these turtles all year round:  Olive Ridley, Hawksbill, Leatherback, and Pacific Green Sea Turtle.

In Tortuguero, Parismina, and some areas in the South Caribbean, it is turtle time!

Yes! Green Sea Turtles arrive at this time of year in the region that gets its name from them: Tortuguero. So, if you are willing to see the huge green sea turtles coming to shore, crawling through the sand, digging a hole with their back paws, laying around 100 eggs, and covering it back before turning back to the ocean… This is the perfect opportunity to watch this magical natural wonder.

July is great to see the resident and endemic species of Costa Rica. Keep an eye out for antbirds, trogons, and scissor-tailed kites, which migrate to Costa Rica from the winter in the south.

It is also a good time of year to see frugivores and insectivores.

The resplendent quetzal is visible in Monteverde and Savegre in July, like other high areas of the mountain ranges. This time of year, young quetzal chicks come out of their nest and start flying around.

Is Costa Rica Crowded in July?

There are no cruise dates in July.

In Manuel Antonio, you will probably have to make a line in the mornings to get into the National Park and in Tortuguero, there might be some waiting time on the boats before getting into the Tortuguero National Park canals.

However, it will definitely be less crowded than in the sunny season.

Due to the increased amount of hydration plants receive, you begin to see fruits and orchards that you wouldn’t be able to during other months. If you’re looking for something unique, look for mild-flavored jocotes or the naranjilla, which makes for a yummy drink. Papaya, passion fruit, and avocado are at their highest productivity and demand in July.