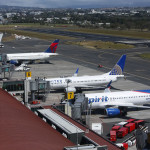 Costa Rica managed to add  21 flights between new airlines, more frequencies and increase of routes, from November, 2014 until last June, according to an inventory given by the Costa Rican Institute of Tourism (ICT).

The result of this period is unusual, admitted Hermes Navarro, chief of Attraction of Investments of the ICT, as in a normal semester, historically, usually we obtain the arrival of a new signature and the increase of about two or three frequencies.

In the last eight months, Costa Rica received five new companies, another five companies increased the flights frequency to cities to which they were already giving the service, and six airlines opened new routes from diverse cities. Most of destinations are to the United States.

Three elements joined to support a space of big results in the attraction of more flights, the representative of the ICT detailed.

One of them is the fall in the international prices of the fuel for the planes.

The second one is the movement  of the market of air lines, with mergers and procurement and the strong politics of savings in the companies.

These two elements imply a reduction of costs and increase of managerial profit, mentioned Navarro.

The third element is that the world experiences a change of airplanes, going from the old and slightly efficient  in the use of fuels to new ones that involve saving and better displacement in services of long distance.

According to Navarro, three factors joined the work of many years of the ICT in the attraction of companies and flights.

It showed that, in accordance with the behavior of the market, it is possible that the good results spread up to the end of  2015. “Possibly we are going to have an impressive calendar year in both airports (Juan Santamaría and Daniel Oduber)”, he added.

Sustainable. The representatives of the tourist private sector highlighted the good work of the Institute, but they think that it is necessary to complement it with a strong promotion  to maintain the flights.

“We have the available seats; the task now is to fill them”, said Tatiana Cascante, executive director of the National Chamber of Tourism (Canatur).

They are calling business in general  to join with the ICT and the tourist private sector to advertise Costa Rica. Cascante gave the  the example of Delta signature, which organizes meetings between U.S. and Costa Rican businessmen, in cities ofthe United States to promote Costa Rica.

Gustavo Araya, president of the Costa Rican Chamber of Hotels, said that this good result does not mean a fair weather, but at least it supported a growth in the travel sector of 1 % in the first semester.