The words Costa Rica and coffee are easy to mix, we do have a reputation for our coffee, coffee raised us, fed us and taught us a lot. Coffee was our mother and our father and gave us a lot… Whatever Costa Rica is right now, was shaped by coffee. 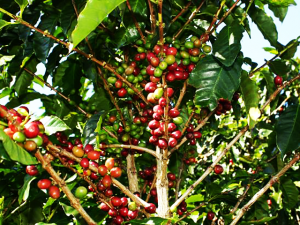 Once, a while ago, on a really popular TV series, the main characters talked about how coffee exploited the workers of Latin America… However, I must say, that, at least in Costa Rica… it is a completely different story for us, as coffee has been historically a Christmas bonus for many families and a great tradition that is the base and foundation of Costa Rica the way we know it.

Costa Rica was brought to Costa Rica in 1816, even before the independence (1821), when we were a rather poor and terribly isolated province of the Spanish Empire. People didn’t know coffee back the and it was merely a curiosity… and a gorgeous ornamental tree. They didn’t want to plant it as the beans without any processing are worthless. It was extemely hard to get the early Costa Ricans to plant something they were not able to consume. (Plus they were used to drink cocoa).
When finally, Costa Rica became a country the government of the time decided to support the product by giving land for free to the people that would plant it. Thousands started planting it and soon enough the mountains of this country came to be covered with coffee plants. However, coffee was not the same bush that we see now. Was sort of small tree or a very tall bush, and the beans couldn’t take a lot of direct sunlight or strong winds. Up until now when bushes are much smaller and have been improved through breeding, in many plantations trees are planted around the coffee fields to protect the bushes from sun and wind, creating great ecological corridors for animals and birds. 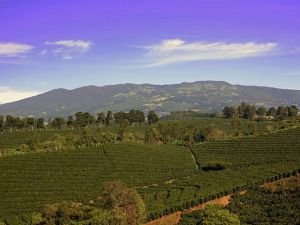 Coffee Plantation and Volcanoes on the back

In terms of our society it created the secret for our peace and democracy: Thousands of small land owners. Even though there was always a small group of people that owned the processing plants and that could do the exporting part of the business, everyone got benefits from coffee. And everyone owned a piece of land, never mind how small.
One of our former presidents used to say that the best Economy Minister we could get was a good coffee harvest.

Coffee created many things, created the National Theater as it started out of an initiative to put a tax on exported coffee (At the end every single imported product paid a tax and that’s where the money came from). It created towns, schools and churches.
Gave us our main symbols: The cart that was used to transport the coffee to the ports. The clay colored robin would tell us when rain was coming. And, our schools get summer vacation in December and January as this is coffee season and all families participated in the harvest. 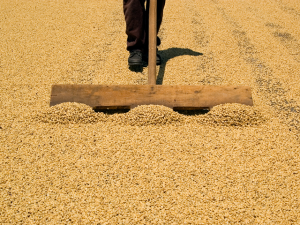 Coffee is not anymore one of our main products, although it is still very important. It is picked in the country areas by the families that own the small plantations or the thousands of immigrants that come from Nicaragua and Panama (In the Southern plantations) to pick it up.

Costa Rica is a small country compared to the giants in the business (Like Brazil or Kenya) we have to go for quality, so, up until today, every single bean is picked by hand so that only the really ripe beans get processed, the only variety allowed in the country is Arabica, as quality wise is the best.
Varieties have been created, and ways to make it have increased to be almost unlimited.

However, coffee as it is, black and poured out of our grandmas “chorreador” (Costa Rican typical way to make coffee) is still THE Costa Rican thing, our mother crop, the sculptor of our culture and our way of doing things. As Costa Rica, the way it is now, was, definitely, born in a coffee field.

The best way for visitors to see a working coffee plantation is to get into one of our Coffee Tours, you can find them in some of the mountains areas n the country… So please ask our travel consultants about them!