Corcovado Foundation gets funding to expand their turtle conservation program 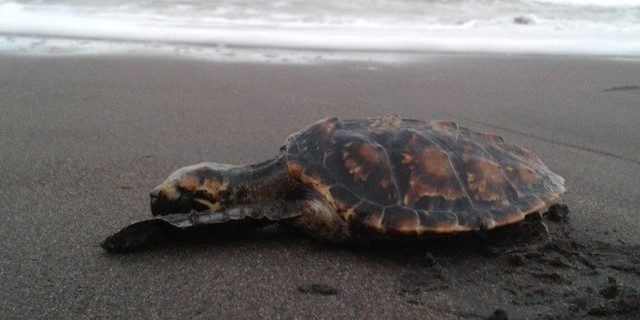 Turtle conservation in Costa Rica has received a boost, with the Corcovado Foundation winning a $30,000 grant to establish a new project in the Rio Oro Wildlife Refuge on the Osa Peninsula.

The grant was awarded to the foundation by Pacsafe, a backpack and travel gear company that assists between one and three projects each year through its Turtle Fund program.

“Rio Oro is a 4.8 kilometre stretch of coastline which sees at least 2000 nests each year. This represents perhaps three times as many that are laid on neighboring beaches in the Osa”, he said.

At present, the adjacent beaches are being protected by other non-profit and community groups, but Rio Oro remains largely abandoned, leaving it extremely vulnerable to poaching.

“The local communities surrounding Rio Oro had requested our help to protect this fragile nesting beach.  We are thrilled to be able to respond”, said Alejandra Monge, executive director of the Corcovado Foundation.

The Pacsafe grant will be providing everything from turtle tags, gloves and backpacks; to local salaries, food, and transportation for the project in Rio Oro and Dr. James says that the company was impressed with the Corcovado Foundation’s mission.

“Environmental education and community involvement will be a huge part of Rio Oro. We will be providing training and skills to local people and raising awareness so that they can take a leading role in conservation activities”, he

Another important aspect of the project will be collaboration with existing conservation efforts in the region, such as Osa Conservation and COTORCO projects on the neighbouring beaches of Piro and Carate.

Phoebe Edge, president of COTORCO, says that locals have seen many organisations come and go over the years and that creating stability is vital to the success of turtle conservation in the Osa.

“The community was missing some sort of identity and importance. COTORCO has helped to bring the community together and we hope that the Corcovado Foundation will be able to enhance this even more”, she highlighted.

Cooperation between NGO´s will be of benefit to the sea turtles as well as so many local people. Together the impact can be incredible!”

The Corcovado Foundation has had great success with their community-based conservation model at its other site in Drake Bay, also on the Osa Peninsula of Costa Rica.

The Drake Bay project (now in its 10th year) has saved 90% of turtle nests from poaching, released over 70,000 hatchlings and generated $90,000 in income for local families.

“Through volunteer placements, local salaries and sustainable tourism we have shown the community that sea turtles are a valuable resource and that there is an economic as well as environmental incentive to incorporate conservation into development”, emphasized Dr. James.

“ACOTPRO, the local association in Drake Bay, is now preparing to take control of the project there, which will be a massive achievement for the long-term protection of the area.”

The Corcovado Foundation continues to call for volunteers to help with the new Rio Oro project, as t

here is plenty of work to be done, including the construction of a volunteer base, sea turtle patrols, turtle tagging, nest relocations and the liberation of hatchlings.

Placements are available from July to March and you can find more information sending us a mail at info@caminotravel.com