Beaches and Rip Currents… Important to know! Now that the high season is around the corner and thousands of people are coming to our beaches, at Camino Travel we decided that it would be important to talk a bit about rip currents right before the peak season and at the beginning of the high season.

And yes! It is a frightening thought, however, it is really important to talk about them and learn as much as possible before getting in the ocean as 80% of the casualties in the Costa Rican beaches are caused by them. There are some beaches that have more currents than others. In the country we find around 600 beaches and only around 30 are really affected by them. However they have caused several casualties throughout the years and it is important to have the information about them, and what to do.

Rip currents are produced by water being pushed up the beach above the average/mean sea level by large breaking waves. Swashes generated by dropping breakers of large swell waves are the most effective in creating the conditions for a rip current.

As in the normal swash process, this water that pushed up on the beach gets pulled back down the slope to the sea surface. The subsequent large breaking waves continue to pile the water up on the beach, causing a temporary build up or damming effect. Water then follows the path of least resistance to the lowest level, such as following an underwater trough. This concentrated flow of returning water to the ocean becomes a rip current, moving fast away from the beach toward the offshore.

Basically it is a current that acts like a fast river flowing away from shore at speeds up to 7.5 mph which is faster than the fastest swimmers in the world.

Components of a rip-current and what to do: 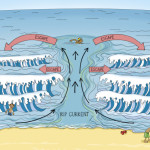 Rip Currents and their parts

The three components of a rip current are the feeder current, the neck, and the head.

The neck: You can feel when you are caught in the “neck” of the back channel out to sea even if you in only up to your knees. This kind of “pull” will feel stronger than just ordinary back wash of a wave. In a strong pull of a “neck” walk parallel to the beach, and move forward towards the beach allowing each wave to help push you to shore. Turning sideways as the waves helps you to keep your balance.

If you are in a “neck” and can’t touch bottom, do not attempt to swim against the current, you won’t be able to and it will drain your energy. Swimming parallel to the beach or floating it out are the only two options. The pull generally ends just past the break however; outflows have been known to go much further, the key is remaining calm.

The head: which forms seaward of the breaking waves and often forms a plume of disturbed water or suspended sand as the rip current slows down.

Know What You are Looking For

Dirty water flowing away, like a river from the shore is a sign of a rip current. Often you can spot the feeder currents as a section of muddy water, sometimes foamy, moving parallel to shore. Rough surf often produces foam along the neck and head.

A calm area in the breaking wave may also indicate a rip current. River estuaries are dangerous areas, the outflow of the river mouth can form an extremely fast moving and deeper channel.

If you are visiting and beach that is not known to you, ask locals about rip conditions. Surfers and lifeguards are the most knowledgeable on rip currents. Also use your observation skills before running headlong into the surf.

It’s easy to assume the waters are safe especially when there are many people in the water, but doesn’t necessarily mean that the area is actually safe.

Fixed or Permanent Rips: A fixed rip is typically found near manmade structures that alter the natural wave formations. Fixed or permanent rips can also be formed by natural structures, sometimes hidden below the surface, such a rock formation. They are also around river mouths and estuaries.

Flash Rip: A flash rip generally does not last long, and are formed from natural wave conditions.

Traveling Rip: A traveling rip is formed on long, open beaches and usually travels with the wave direction. 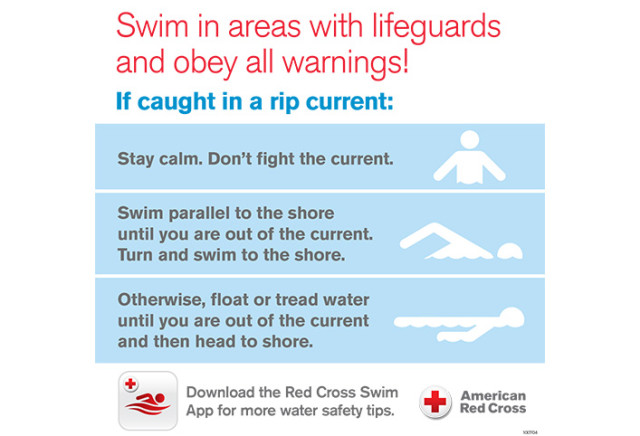 If you get caught in a rip current, you need to know your options:

1. For assistance, stay calm, float and raise an arm to attract attention.

2. While floating, rip currents may flow in a circular pattern and return you to an adjacent sandbar.

3. You may escape the rip current by swimming parallel to the beach, towards the breaking waves.

4. You should regularly assess your situation. If your response is ineffective, you may need to adopt an alternative such as staying calm, floating and raising an arm to attract attention.

These may sound like simple options, but rip currents are complex, dynamic processes and all responses also have their pitfalls. You could float on an unpatrolled beach and not be returned to a sandbank with no-one there to help. You can also swim parallel and end up swimming against a longshore current which can flow along a beach; this will see you get tired quickly.Therefore, the best thing you can do is avoid them!

Studies have confirmed that rip currents do not pull people under water causing them to drown.  They simply take a person away from the beach, often eventually back into the wave zone. Rip current related drowning deaths are therefore due to variable factors including:

b.    The instinctive nature to attempt to swim directly back into shore against the rip current which leads to fatigue,

c.     The panic which results and the impairment of judgment,

d.    Not attending a patrolled beach where services are able to assist/rescue.

2.     Rip currents can be hazardous all the time, not just when there are large surf conditions
When waves are larger the speed of the rip current is also higher resulting in increased risk. However, when these conditions exist less people typically enter the water. It’s on days when the surf is moderate that more drowning deaths occur as more people go swimming.

3.     Calm water is not always ‘safe’ water
Many people end up in a rip current as a result of choosing to swim in an area of calm water on the beach. Unfortunately, where rip currents start on the shore, the water often has a calmer appearance with ripples on the surface indicting a subtle flow of water out to sea. The best area to swim is between the red and yellow flags to ensure you are under supervision of lifeguards.

4.     Rip currents can be used wisely depending on your ability in the surf environment
Lifesavers and lifeguards use rip currents to get to people in trouble more quickly and surfers often use a rip current to get out through the wave zone. However, in order to do this, it takes years of training and experience and caution must always be taken.

Costa Rica beaches see millions of visitors each year and many have best beach awards, but the dangers of ocean are often masked by it beauty and splendor.

Please ask your hotel staff about the rip currents, they are usually locals and they know exactly where they are, if there are currents.