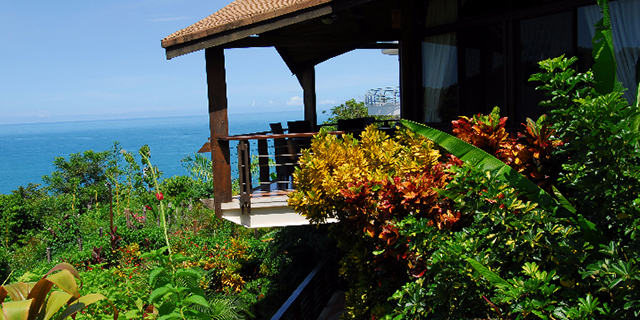 Tulemar Resort, in Manuel Antonio, Costa Rica was once again awarded the Costa Rican Blue Flag Award in 2014 for its beautiful beach. The prestigious Blue Flag Award is awarded every year by the Blue Flag Program to the cleanest beaches throughout the Central American country. Communities have to show a true commitment to keeping their beach sustainable and ecologically friendly.

Tulemar beach is a unique one, in that it is a small, secluded beach enclosed by a jungle cove, keeping it hidden from other beaches. The beach features soft sands and eighty-degree water, that laps up to beach-goers toes with a mild tide. A freshwater creek, from the jungle in which Tulemar lays in, trickles down into the cove at one end of the beach.

Tulemar spokesperson, Dave Houck commented on the resort’s understanding of a need to preserve that beauty, while also catering to its guests throughout the year. “Our staff here at Tulemar takes an immense amount of pride in keeping this natural beauty pristine, while also making it a comfortable place for its guests. The balance between the two, while hard, is what we pride ourselves on.”

The resort, which features privately owned luxury vacation rentals, seems to have a knack for that balance, as it has been awarded the Blue Flag Award eight years in a row. This year, however, is particularly special for the Costa Rican resort, as they have jumped up from a one-star Blue Flag beach, to becoming a three-star beach in 2014. That jump is a big one, as out of the 129 beaches that were evaluated, eighty-nine beaches were awarded the one-star honor, twelve two-stars, and with only Tulemar and three other beaches in Costa Rica being awarded the three-star honor. No beaches received four-stars, while the five-star award was given to three beaches.

Houck was ecstatic about jumping up two spots, understanding just how much it means. “It’s not easy to move up in the Blue Flag rankings. To move up one star is a huge honor, but two? That means so much. The staff here is so happy to be recognized for their hard work at keeping the beach a natural ecological beauty through our sustainability initiatives.”

That recognition comes from much more than just the Blue Flag Award, but also from the jungle itself. Tulemar boasts an almost national-park-like feel to it, with all three types of native monkeys, both types of sloths, reptiles, and birds all being visitors to beach as well as the resort’s guests. Houck joked that seeing that response from the jungle was key to knowing Tulemar was achieving the balance they strive for, saying, “We like to say here, that if you have humans and animals enjoying the beach together, then we must be doing something right. What better way is there to gauge keeping a place natural than from nature itself?”

The animals and the Blue Flag Program seem to be applauding in unison, and Houck hopes to continue to please the both of them with their commitment to keeping Tulemar’s beach pristine. “Moving up in the ranks only raises the standards for us, and I know we are excited to take on that challenge. Who knows, maybe next year we can climb again in the rankings.”

6 Important Reasons to Get Travel Insurance for your Trip to Costa Rica
May 3, 2021
Go to Top