35 Facts on the rainforests 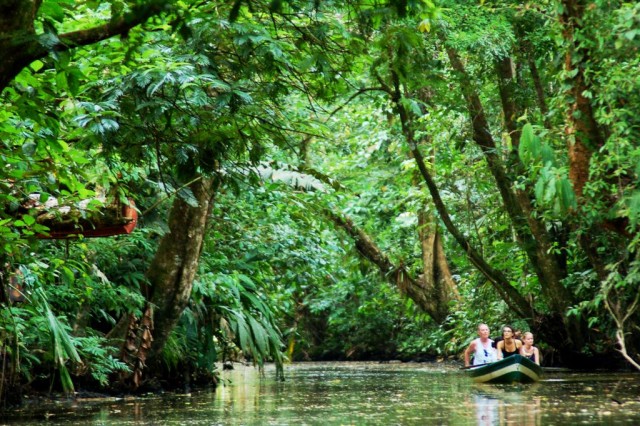 35 Facts on the rainforests are tidy bits that are interesting to aknowledge, especially when you are about to walk through one of these magnificent realms.

For anyone who goes on a trail through a rainforest the system comes to be of great value when you underestand and appreciate how transcending they are in our lives.

Fact 1: Rainforests only cover around 2 percent the total surface area of the Earth, but really about 50 percent of the plants and animals on the earth live in the rainforest. In Costa Rica there is  31% of protected rainforest

Fact 2: Rainforests are the forests that receive high amount of rainfall.

Fact 3: You can find rainforests in many countries, they can be found in Alaska and Canada, as well as Asia, Africa and Latin America.

Fact 4: Rainforests are found on all of the different continents, except for Antarctica because it is far too cold there for the environment to be conducive.

Fact 5: There are two different types of rainforests, and they include both temperate and tropical. Costa Rica has tropical rainforests.

Fact 6: Rainforests help to regulate the temperatures around the world and the weather patterns as well.

Fact 7: A fifth of our fresh water is found in tropical rainforests.

Fact 8: Rainforests help to maintain our supply of drinking water and fresh water, so they are critical in the sustainability of the earth.

Fact 9: About 1/4 of natural medicines have been discovered in rainforests.

Fact 10: Within four square miles of tropical rainforest, you will find 1500 flowering plant species, 750 types of trees, and many of these plants can be helpful in combating cancer.

Fact 11: 70% or more of the plants that are used to treat cancer are found only in the tropical rainforests on the planet.

Fact 12: Over 2000 types of plants that you find in the rainforest can be used to help aide in cancer treatment because they have anti-cancer properties.

Fact 13: Corcovado National Park in the South Pacific area of Costa Rica is the most diverse rainforest (per hectare) in the World. Meaning than in each hectare of Corcovado there are more different species than anywhere in the World.

Fact 14: Less than one percent of the species of plants in the tropical rainforests have actually been analyzed to determine their value in the world of medicine.

Fact 15: Rainforests are threatened each and every day, especially by practices such as agriculture, ranching, logging and mining.

Fact 16: There were around 6 million square miles of rainforest in the beginning, but now because of deforestation, there are really only less than half of that still found in the world. Costa Rica has gained back its forests by 60% from 1985 to 2015.

Fact 17: If the rainforests continue to decline in the way that they have been, then about 5-10 percent of their species will go extinct every ten years.

Fact 18: 90% of the world’s forests are in the underdeveloped or developed countries around the world.

Fact 19: Every second there is part of the rainforest that is cut down. In fact, you probably lose over 80,000 football field’s worth of rainforest each and every day.

Fact 20: There are a lot of different types of animals that can be found in the rainforest, and most of them cannot live anywhere else because they depend on the environment of the rainforest for their most basic needs.

Fact 21: In each meter of the rainforest soil there are thousands of seeds waiting for some sun and water to sprout. They can wait, alive, for decades

Fact 22: A lot of the oxygen supply that we have throughout the world is supplied by the tropical rainforests, even though they are miles and miles away. This may come as a shock to some people.

Fact 23: The average temperature of the tropical rainforest remains between 70 and 85° F.

Fact 24: Timber, coffee, cocoa and many medicinal products are few of the products produced by rainforests, including those used in the treatment of cancer.

Fact 26: Trees in tropical rainforests are so dense that it takes approximately 10 minutes for the rainfall to reach the ground from canopy.

Fact 27: About 80% of the flowers found in Australian rainforests are not found anywhere in world.

Fact 29: Insects make up the majority of living creatures in the tropical rainforest.

Fact 33: At the current rate of depletion, it is estimated that 5–10 percent of tropical rainforest species will be lost per decade.

Fact 34: Most of the tropical rainforests, approximately 57 percent, are located in developing countries.

Fact 35: About 70% of the plants identified by the U.S. National Cancer Institute which can be used in the treatment of cancer are found only in rainforests.